Forecast: By handing over Artsakh to Azerbaijan, Russia will become superfluous in Armenia 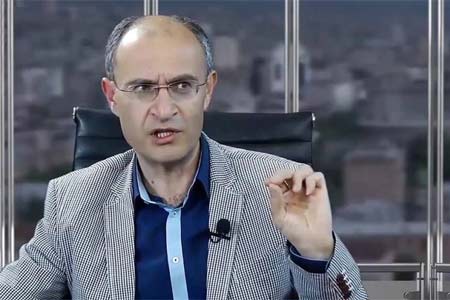 ArmInfo. As soon as Russia hands over Artsakh to Azerbaijan, it will immediately become superfluous  in Armenia. Conservative Party Chairman Mikayel Hayrapetyan expressed a similar opinion to ArmInfo.

In addition to geopolitics, the politician links further Russian  prospects in the Caucasus and Armenia, in particular, with the  content of statesmanship and the gradation of the political will of  the Armenian leadership. In his opinion, the very the realization by  the Armenian society that a deal was made around Parukh and Karaglukh  speaks volumes. Hayrapetyan himself considers the current situation  in Artsakh to be a continuation of the previous agreements, within  the framework of which a change of power and a bloody 44-day  imitation of war took place in Armenia.

"It's another matter that the Turks and their Absheron satellites,  perfectly seeing the current situation of the Russian Federation  stuck in Ukraine, are actively trying to speed up, move forward the  schedule for the implementation of those very agreements. Everything  is literally in sight. Shoigu's "brilliant operation", Putin's "  inseparability of Karabakh with Azerbaijan" - after all, all this was  said quite openly. And the latest reactions to the peacekeepers from  Yerevan to the continuation of that operation in Artsakh are the  maximum that these appointees of the Russian Federation can do.Like,  by the way, all the previous ones.  "More is not given to them," he  said.

Hayrapetyan conditions the recent contradictions between the  statements of the Russian and Azerbaijani Defense Ministries on the  situation around the village of Parukh with the US and France's  statements addressed to Moscow and Baku. In particular, he views  Moscow's accusations against Baku as a forced step back from the  planned and agreed deal and the small operation on Parukh. "To give  some advice and recommendations to the current government in the  direction of finding a way out of the current situation that is not  very comforting for Armenia and Artsakh, I think, is completely  unnecessary. First of all, due to the content and nature of the  formation of this very government. Its predecessors "knew  everything", this government " does not know and does not want to  know anything. "I know that the current non-standard situation in the  political sense can and should be changed exclusively through  non-standard methods. For which the current government needs to at  least forget about its own stomach and remember the homeland,  statehood and conscience. For the time being, I consider it premature  to disclose other details," the politician summed up.