Russia is staking its all in Ukraine, Armenian political analyst says 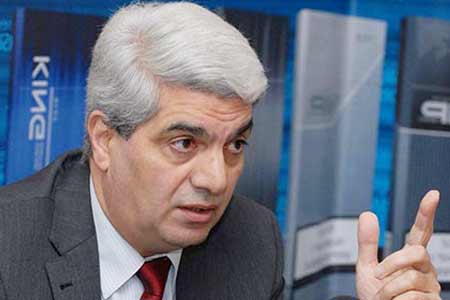 ArmInfo.Russia is staking its all in Ukraine. In any case, all of Moscow's recent steps are evidence thereof, Stepan Grigoryan, Head of the Analytical Center on  Globalization and Regional Cooperation, said in an interview with  ArmInfo.

"The very fact of Russian invasion of Ukraine, beyond the Donetsk and  Luhansk regions, is evidence thereof. Before February 24, few people  could think Moscow was capable of that. And now the Russian leaders  are staking their all only to win an outright victory in the war. And  this is the reason why the theater of war is being consistently  expanded, with more and more Ukrainian towns and villages becoming  the targets," Mr Grigoryan said.  In this context he points out the  warnings issued by U.S. President Joe Biden and NATO Secretary  General Jens Stoltenberg that Russia could use chemical weapons. Mr  Grigoryan said again that few people believed Russia would launch an  invasion of Ukraine despite numerous warnings by Washington and  Brussels.

Therefore, chemical weapons could be used as well, especially in the  context of the Russian representatives' statements at the U.N. that  Russia could, if necessary, use even nuclear weapons. Mr Grigoryan  hopes that Moscow's statements are merely a means of exerting  pressure on its opponents, and it is Moscow's threatening tone that  prevents NATO from closing the sky over Ukraine.

"It is clear that using nuclear weapons will prove fatal for Russia  itself. So I consider such a scenario unlikely in contrast to  possible use of chemical weapons. As to the people who consider it  unlikely, I would advise them to think back to the period before  February 24 and on the U.S. warnings of the planned attack," he said.

As regards the impact the situation in Ukraine could have on Armenia  and Artsakh, Mr Grigoryan thinks such an impact could be significant.  In this context, he points out a need for considering all the  possible scenarios that could unfold in Armenia as a result of the  situation in and round Ukraine.

"Given the Aliyev regime's recent provocations in Artsakh, we can see  the situation in Ukraine affects Artsakh in some ways or others. And  Armenia's relevant agencies should know the ways  of opposing it," Mr  Grigoryan said.