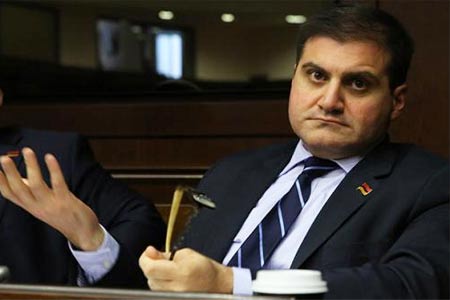 ArmInfo.. The post-Soviet space is seeing two rival choices now - the first is isolation in company with Russia and the second is joining the civilized world in company with  Ukraine. And Armenia is sure to face this choice in the future, Arman  Babajanyan, Chairman of the For the Republic Party, said in an  interview with ArmInfo.

"What is, in fact, going on is a fight between two leaders in the  post-Soviet space. Ukraine is being supported by the West, whereas  Russia is isolated. And I would like to stress that the predictions  of consequences of the Russian-Ukrainian conflict for Armenia - that  they will be restricted to a conflict with Azerbaijan - are, in fact,  inaccurate. The Ukraine developments are directly related to Armenia,  and their consequences are not only a growing Azerbaijani-Turkish  threat," he said.

Mr Babajanyan notes the West does not demand that Armenia "decide on  its position on Ukraine," while Armenia is not making any proposals.  According to him, Yerevan shares the responsibility for the absence  of an Armenian agenda in the West. In this context, he recalls the  proposals for Yerevan drawing up a clear security and defense  cooperation agenda the West made in the wake of the 44-day war.  "I  personally was convinced of the willingness displayed by the United  States and, of course, by France.  But I have never seen Yerevan's  initiatives. And I cannot understand how it happened that we did not  even attempt to convert the friendly relations with France into a  contractual basis. Armenia has not a single document cementing  relations with the country that has repeatedly shown its friendly  attitude and willingness to support our country.  I am sure that no  threats from the North must ever prevent Armenian- French relations  from being cemented by means of a strategic partnership agreement,  with a defense component enshrined in it. The present geopolitical  situation and Armenia's interests require it," Mr Babajanyan said.