Russia or Ukraine: Armenia to make a choice sooner or later 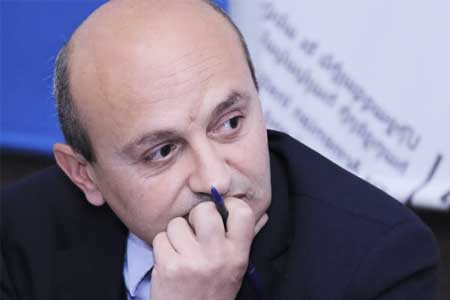 ArmInfo.By "abstaining" from voting on the situation in Ukraine at the UN General Assembly official Yerevan was, no doubt, acting in Armenia's security  interests, Stepan Safaryan of the Armenian Institute of International  and Security Affairs said in an interview with ArmInfo.

"And Armenia is quite likely to be made to choose between Russia and  Ukraine sooner or later. And this choice is going to be most  undesirable and painful for us. In any case, Armenia is not an  international actor expected to make active political steps or  statements on the situation in Ukraine, especially in the context of  aftermath of the 44-day Azerbaijani aggression. With serious national  security problems, Armenia cannot afford a luxury of choosing between  two important centers of powers in this particular process," Mr  Safaryan said.

Comparing the situation in Ukraine with the 44-day war in Artsakh, Mr  Safaryan explained the substantial differences between the  international reaction to Ukraine and the lack thereof in Artsakh's  case by the fact that Ukraine is positioning itself as part of  Europe, whereas Armenia cannot act similarly.

Commenting on the Moscow-Kiev negotiations simultaneously with the  hostilities, Mr Safaryan believes it is Moscow's attempt to size up  the consequences of threats and hostilities for Kiev. According to  him, President Vladimir Putin is seeking to force his Ukrainian  counterpart Volodymyr Zelenskyy into admitting Ukraine's defeat  himself - by means of threats and surrounding Ukrainian cities,  without establishing control over Kiev.

"In any case, Armenia-like countries do not at all benefit from the  collapse of the existing world order, as it is the world's most  vulnerable regions of simmering conflicts that suffer in such cases,  and the conflict over Artsakh is one of them. I think we should  always bear it in mind in making statements addressed to both our  ally Russia and the West," Mr Safaryan said.

On March 3, the Russian president introduced before the State Duma   the bill on ratification of the protocol on amendments to the   Agreement on CSTO peacekeeping activities, which was signed in   Dushanbe, Tajikistan, on September 16, 2021. The protocol introduces  the concept of "Coordinator-State" and provides for the formation of  CSTO peacekeeping forces under the Coordinator-State's auspices to be  involved in UN peacekeeping operations. Signing and ratifying the  protocol opens up opportunities for collective involvement in UN  peacekeeping operations in behalf of the CSTO, with one of the CSTO  member-state as coordinator.

Commenting on this fact, Mr Safaryan said that the reason for the  bill is Moscow realizing the stalemate situation in Ukraine.  Specifically, the reason is the lack of consensus on the situation in  Ukraine within the CSTO.

"We can see Moscow has never succeeded in ensuring unanimity of views  within the CSTO, which convinced Valdimir Putin of the CSTO's  nonexistence as a military bloc. Nonetheless, Russia cannot ignore  the other CSTO member-states' positions, which necessitates an  expeditious ratification of the protocol. That decision would allow  Moscow to play a key role in making decisions on Ukraine. In other  words, it is an attempt to preclude further disagreements," the  expert said.