Moscow is seeking parity in its relations with Yerevan and Baku,  Russian expert says 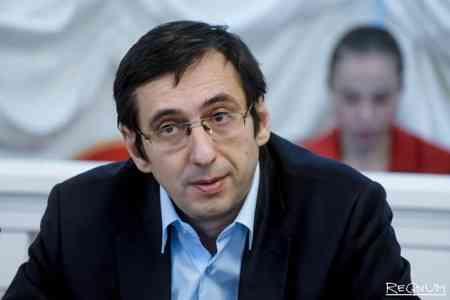 ArmInfo. Moscow is seeking parity in its relations with Yerevan and Baku. Evidence thereof is the Declaration on Allied Relations recently signed by Russia and  Azerbaijan, Russian political scientist Andrey Areshev said in an  interview with ArmInfo.

The declaration was signed in Moscow on February 22. Some of its 44  points deal with the bilateral military cooperation.

"I see the motive behind the signed document, namely, Russia's desire  to maintain equally close and mutually beneficial relations with both  Armenia and Azerbaijan. And the practically identical documents on  Russian-Armenian alliance and now on Russian-Azerbaijani alliance  form the necessary legal basis for that. And the declaration signed  in Moscow enables Russia to successfully maintain parity in its  military and technical cooperation with both the states as well," he  said.

According to Mr Areshev, Russia will seek to make Azerbaijan  increasingly dependent by supplying spare parts for the weapons  Azerbaijan once purchased from it and by ensuring regular  maintenance. On the other hand, by actively and consistently  upgrading Armenia's armed forces, Russia will continue its own policy  of maintaining parity between the two parties to the Nagorno-Karabakh  conflict over the last to decades.

In the context of the willingness for peace stated by Armenia's  ruling force, Mr Areshev does not expect Yerevan to express its  discontent with the Russian-Azerbaijani relations reaching a new  level. On the other hand, at lower levels negative opinions can and  will be voiced. The expert is sure that Baku coordinated the signing  of the Azerbaijan-Russian declaration with Ankara.

In this context, Mr Areshev highlights the importance of the  declaration for Azerbaijan as an element of balance with its close  ties with Turkey. Since the Shushi Declaration was signed the need  for Baku to diversify its relations with Turkey in the context of its  relations with the other centers of power, in particular with Russia,  has become increasingly urgent. And the current political turbulence  in the South Caucasus and Black Sea region only corroborates it.