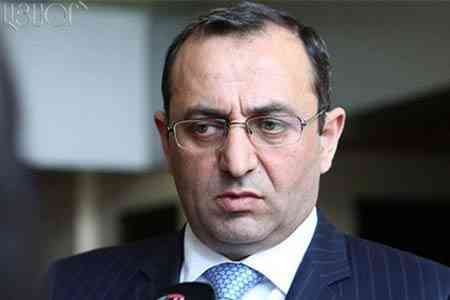 ArmInfo. The opposition parliamentary factions will soon discuss a possibility of nominating a candidate for Armenia's presidency.

Artsvik Minasyan, Secretary of the Armenia faction, stated that the  faction has not yet discussed the issue, but will soon nominate its  candidate according to a number of criteria. According to Mr  Minasyan, the president must not represent a political party or be a  government or opposition-nominated canditate.

"He must ensure full implementation of the Constitutional  provisions," he said.  Tigran Abrahamyan of the With Honor  parliamentary faction pointed out the need for realizing the  advisability of nominating a candidate. And the faction has to adopt  its attitude to the government- nominated candidate.

At his online press conference on January 24, Armenia's Premier Nikol  Pashinyan stated that President Armen Sarkissian informed him of his  decision to resign a couple of hours before handing in his  resignation. Mr Sarkissian said that was his final decision.   According to Mr Pashinyan, Armenia's political majority had no time  to think of its presidential candidate. According to him, "faced with  the present-day threats", the authorities must make decisions that  would ensure "political harmony" between the president, Parliament  and Government.

"In case the official withdraws his/her resignation within a week,  the President of the National Assembly shall make a relevant  statement. In case he/she does not, a relevant protocol shall be  adopted and signed by the President of the National Assembly. The  resignation shall be considered accepted the moment the protocol is  posted," Mr Simonyan said.