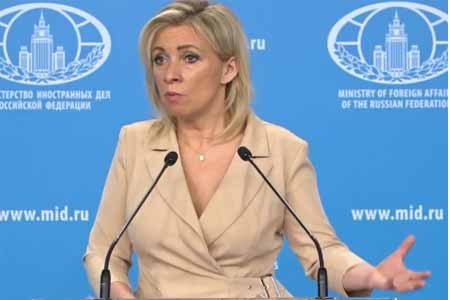 ArmInfo. Russia, as a co-chair of the OSCE Minsk Group, supports the continuation of the work of this format, in accordance, first of all, with its mandate.  This was stated on January 20 at a weekly briefing by official  representative of the Russian Foreign Ministry, Maria Zakharova,  referring to the statements of the Azerbaijani leader about the  inexpediency of further activities of the Minsk mediators in view of  the fact that the Nagorno-Karabakh conflict has already been resolved  by Azerbaijan by force.

According to her, the activities of mediators should also be carried  out taking into account the regional realities that have emerged  after 2020. "Our is fully supported by our partners in the OSCE Minsk  Group - the United States and France. This was reflected in the joint  statement of the heads of the foreign ministries of the co-chairing  states of the Minsk Group dated December 7, 2021", she said.

At the same time, Zakharova recalled that this statement calls on  Baku and Yerevan to receive the OSCE Minsk Group co-chairs in the  region in the near future, which will allow them to assess the  situation directly on the ground, on the spot to achieve tangible  progress in the implementation of humanitarian initiatives, which  were discussed at the meetings of the mediators with Foreign  Ministers of Armenia and Azerbaijan. "Following the results of the  above-mentioned contacts, which took place in September and November  last year, respectively in New York and Paris, on the sidelines of  the OSCE Ministerial Council meeting in Stockholm on December 2,  2021, the co-chairs handed over to both Ministers balanced, quite  realistic proposals on the agenda for further interaction. This was  aimed at solving urgent humanitarian problems, and issues, first of  all, of a socio-economic plan. We expect an official reaction from  the parties, including on the issue of the resumption of the  Co-Chairs regional visits," Zakharova summed up.

It should be noted that on January 12, President of Azerbaijan Ilham  Aliyev, in an interview with Azerbaijani TV channels, among other  issues, touched upon the activities of the OSCE Minsk Group. Once  again, criticizing their work, Aliyev stated that mediators should  not deal with the Nagorno-Karabakh conflict, since it has been  resolved, and if one of the conflicting parties says that the issue  has been resolved, then mediation is no longer required. At the same  time, he threatened to take tough action if the mediators decide to  intervene.