David Babayan: Stepanakert maintains contacts with OSCE Minsk Group  co-chairs through various platforms and waits for their visit to  Artsakh. 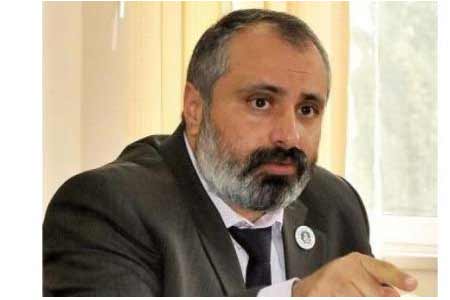 ArmInfo.The OSCE Minsk Group Co-Chairs have not made visits to Artsakh for quite a long time. Artsakh Foreign Minister David Babayan stated this on January  19 during a press conference in Stepanakert.

In this vein, he recalled that their last visit to Stepanakert was at  the end of 2019. According to Babayan, then there was a pandemic, the  war and their visits were constantly postponed. "However, these are  all technical obstacles. A more serious obstacle from a political  point of view is Azerbaijan, which apparently hinders their visit and  causes various problems. Of course, we are in touch with the  co-chairs. You know that there was a meeting between the President of  Artsakh and the new Russian mediator in Yerevan, which I also  attended", Babayan said, adding that Artsakh highly appreciates this  meeting, which was held in a constructive environment and important  issues were discussed.

At the same time, the head of the Foreign Ministry of Artsakh  expressed hope that the mediators would still visit Artsakh, despite  the obstacles of Azerbaijan. In this vein, he pointed to the latest  statement by the President of Azerbaijan, in which there was also  criticism of the mediators. "According to the logic of Azerbaijan,  the OSCE Minsk Group should be abolished. But I do not think that the  co-chair countries will succumb to this blackmail and Azerbaijan will  achieve its goal. Goals are difficult to achieve, easier to put  obstacles. Therefore, I want to say that we are waiting for their  visit through various platforms, we have a connection with them, and  we can convey our point of view to them", Babayan summed up.

It should be noted that on January 12, President of Azerbaijan Ilham  Aliyev, in an interview with Azerbaijani TV channels, among other  issues, touched upon the activities of the OSCE Minsk Group,  Criticizing their work once again, Aliyev stated that mediators  should not deal with the Nagorno-Karabakh conflict, since it has been  resolved, and if one of the conflicting parties says that the issue  has been resolved, then mediation is no longer required. At the same  time, he threatened to take tough action if the mediators decide to  intervene.