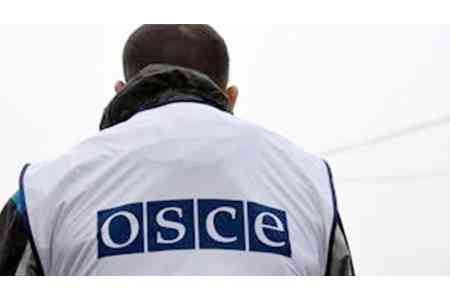 ArmInfo.The current Chairmanship of the Organization for Security and Cooperation in Europe (OSCE)  reiterates its full support to the OSCE Minsk Group  Co- Chairs.

This is stated in the statement of the Polish OSCE Chairmanship in  response to an inquiry from "Armenpress" in connection with recent  statements by Azerbaijani President Ilham Aliyev addressed to the  co-chairs of the Minsk Group. " The Polish Chairmanship is not in the  position to comment on the public statements of the President of  Azerbaijan e reiterate our full support and appreciation for the work  of the OSCE Minsk Group, its Co-Chairs and the Personal  Representative of the Polish OSCE Chair-in-Office Ambassador Andrzej  Kasprzyk,", the OSCE Chairmanship-in-Office from Poland replied.

It should be noted that on January 12, President of Azerbaijan Ilham  Aliyev, in an interview with Azerbaijani TV channels, among other  issues, touched upon the activities of the OSCE Minsk Group. Once  again, criticizing their work, Aliyev stated that mediators should  not deal with the Nagorno-Karabakh conflict, since it has been  resolved, and if one of the conflicting parties says that the issue  has been resolved, then mediation is no longer required. At the same  time, he threatened to take harsh action if all the mediators decide  to intervene.