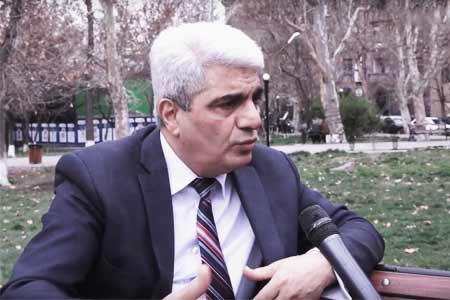 ArmInfo."In view of the critically important normalization of Armenian-Turkish relations, I disagree entirely with the opponents of the process, especially with  fifth columnist," Stepan Grigoryan, Board Chairman, Analytical Centre  on Globalisation and Regional Cooperation (ACGRC), told ArmInfo.

"Irrespective of its prospects, this process had to be commenced. And  the logic is not at all in that Armenia cannot normally develop amid  a partial blockade. Our opposition forces are preferring to remain  silent over the fact that Russia itself is for and actually demanding  land communication for Turkey and Azerbaijan via our territory. In  this context, normalization of relations with Turkey seems to be the  right way, at least in view of the fact that unblocked regional  communications will in any case not run counter to Armenia's  interests," Mr Grigoryan said.

He stressed a need to reckon with all the nuances and prospects of  rapprochement in any steps during the negotiations with Ankara. With  Russia not honoring its allied commitments, Armenia has to relax its  policy toward its neighbor [Turkey]. And amid the ongoing  geopolitical and global changes involving international relations,  being flexible is necessary, Mr Grigoryan said.

Despite limited prospects for success of the process, Mr Grigoryan  believes it is a politically right step, considering the deterrent  effect being produced on Ankara by the USA and the EU, which have  lately had strained relations with Turkey. In this context, any  attempted pressure on Yerevan to force it into unilateral concessions  will prove a blunder Turkey will commit. According to him, this was  mentioned at the Pashinyan-Aliyev meeting in Brussels. Irrespective  of whether Turkey sets preconditions or not, the Armenian negotiators  must always consider a possibility of Ankara changing its policy,  including its policy toward Armenia. And even if the process gets  under way without any preconditions, Turkey could set them at any  moment. In this context, Mr Grigoryan points out a need to realize  the complexity of Turkey's foreign policy in drawing up the  negotiations agenda.

"In view of its grave problems with the USA and the EU, Turkey from  time to time makes tactical overtures to Russia over some issues,  which, however, does not keep Ankara from showing hostility to Moscow  when it comes to other issues. And while Russia and Turkey are both  satisfied with their joint steps in the South Caucasus, Turkey's  overt support of separatist sentiments in Russia is a cause of  seething discontent in Moscow. And this is another all-important  factor of the constantly changing situation. In this context, our  negotiators have to consider the negotiations agenda not only through  the prism of possible preconditions by Turkey, but also in the light  of the accompanying dynamics," Mr Grigoryan said.