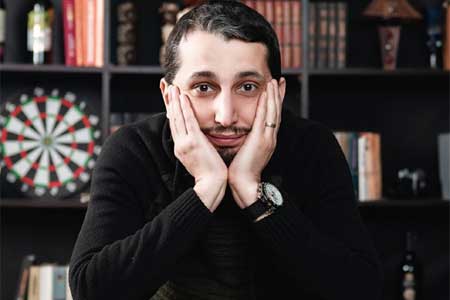 ArmInfo.The last work of the modern Armenian writer Hovik Afyan "Red" ("Karmir") was recognized as the best fiction book in the TCK Publishing  international contest. As reported by the press service of the  Antares Media Holding, only Hovik Afyan represented Armenia at the  competition.

According to the source, the book tells about different times, wars,  dreams and suffering, about people who love or fight within  themselves, in their home, city, on the borders of their country. And  this love and struggle is endless.

In his work, the author emphasizes that war changes everything. Even  the artists 'favorite palettes and the dancers' movement. Only  people, who fight or seek peace, each day moving further away from  it, remain unchanged.

"Since among hundreds of books," Red "was the only one representing  Armenia, now I can be calm, as I am sure that I have done something  for my country," Afyan said. It should be reminded that this year  Hovik Afyan won in the "Prose" nomination at the annual competition  among literary figures of Armenia at the Yerevan Book Fest. In  addition, Afyan's "Red" was included in the short-list of theEuropian  Prize of Literature.