Pena Parra: The opening of the Nunciature of the Holy See in Yerevan  will become a symbol for building bridges in the region 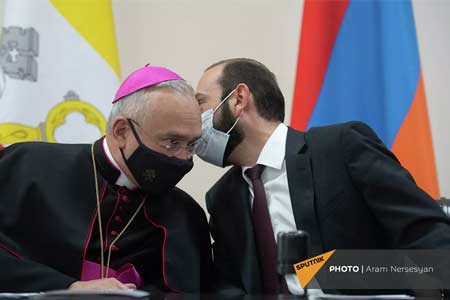 ArmInfo.The opening of the Apostolic Nunciature of the Holy See in Yerevan is an important event that will open a new page in the history of diplomatic relations  between Armenia and the Vatican. Armenian Foreign Minister Ararat  Mirzoyan stated this on October 27 in Yerevan during a statement for  the press following a meeting with Substitute for General Affairs of  the Secretariat of the Holy See Archbishop Edgar Pena Parra.

According to the Armenian Minister, a wide range of issues of  bilateral relations was discussed at the meeting and an agreement was  reached on deepening cooperation between Armenia and the Vatican. The  recent visit of the RA President to the Holy See was also touched  upon.

At the same time, Mirzoyan stated that the Holy See has always  supported Armenia in its difficult times, and last year was no  exception from this point of view.

He stressed the importance for Armenia of the consistent position of  the Vatican on Nagorno-Karabakh and the settlement of the  Nagorno-Karabakh conflict, as well as on the issue of establishing  long-term peace in the region.

"In particular, in the days of Azerbaijan's large-scale military  aggression against Artsakh, and the post-war period, the messages of  His Holiness, as well as calls for the release of prisoners of war  had an important role. As you know, Azerbaijan continues to hold  Armenian prisoners of war and civilian hostages in violation of  international humanitarian law and its obligations under the  trilateral declaration of November 9, 2020. And we ask that Pope  Francis, in his prayers and public messages, continue to remember the  Armenian prisoners of war, and indicate the imperative for their  immediate release, "the Armenian Foreign Minister said.

At the same time, Mirzoyan also pointed out the need to protect and  preserve the Armenian cultural and religious heritage in the  territories of Artsakh, which came under Azerbaijani control as a  result of the 44- day aggression. He recalled that currently this  heritage is under the threat of complete destruction. "And from this  point of view, we pointed out the importance of the interest of both  UNESCO and the Holy See in this issue. Barbarism in relation to  historical and cultural monuments, which are the religious and  cultural heritage of peoples, grossly violate international law and  steps should be taken to prevent it,"  said the Armenian Minister.

He also expressed gratitude to Francis for his principled position on  the Armenian Genocide, pointing out the importance of this approach  in preventing new crimes against humanity in the world.

At the same time, he informed that the Catholic Church is present in  Armenia through various social and humanitarian projects.

In conclusion, he expressed his conviction that the presence of the  Nunciature would be useful in terms of eliminating possible problems  and finding satisfactory solutions through legal instruments.

"I would like to reaffirm the support of the Holy See for topical  issues on the agenda of the Armenian government and issues on the  international agenda aimed at peace and disarmament, human rights,  religious freedoms, protection of human and cultural capital, as well  as environmental issues," he concluded.