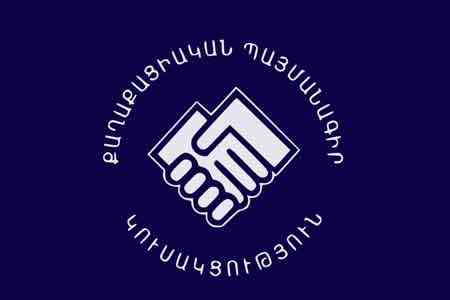 ArmInfo. On October 27, the ruling "Civil Contract" faction did not participate in the voting of the draft statement of the National Assembly on the situation around  the Republic of Armenia and Artsakh due to the internal political  assessments in the document thereby failing it.

Yesterday, at the end of the working day, on the proposal of 1/5 of  the total number of parliament members, a closed discussion on the  topic of "The situation on the line of contact between Armenia and  Azerbaijan and the issues of demarcation" was held. As Rubinyan  pointed out, co-rapporteurs will be First Deputy Chief of the General  Staff of the RA Armed Forces Kamo Kochunts and Commander of the  Border Troops of the RA NSS Arman Maralchyan. At the end of the  discussion, head of the Hayastan opposition faction, former Minister  of Defense of the Republic of Armenia Seyran Ohanyan stated that as  of today, without any legal basis, by compulsion from Azerbaijan, the  border is being demarcated.

As rapporteur of the draft statement, MP of the "I Have Honor"  faction Tigran Abrahamyan stated,  the National Assembly of the  Republic of Armenia in the document drawn up, among other things, as  a result of a closed discussion, condemns: the large-scale armed  aggression unleashed by Azerbaijan and Turkey against Artsakh on  September 27, 2020 with the involvement of mercenaries and  terrorists; gross violations of international law in relation to  prisoners of war and hostages held by Baku, including after the  cessation of hostilities; seizure of the territories of the Republic  of Artsakh by Azerbaijan; acts recognized as war crimes; invasion of  the sovereign territory of the Republic of Armenia, prolonged use of  force or the threat of its use. The Armenian parliamentarians in the  document also condemn the incessant rhetoric of hatred towards  Armenia by the military-political authorities of Azerbaijan, the  presentation of one-sided and distorted information to the  international community from Baku. This policy, as noted in the  statement, is accompanied by claims in the territory of Armenia and  Artsakh.   According to the document, state borders are determined on the basis  of international law, on the basis of the UN Vienna Convention,  according to which, among other things, any agreement on borders with  the use or the threat of use of force is invalid. The members of the  RA Parliament believe that the main condition for establishing peace  in the region is the guaranteed realization of the right to  self-determination of the people of Artsakh in their historical  homeland, as well as the de-occupation of the occupied territories of  Artsakh in the format of the OSCE Minsk Group co-chairmanship.

The parliamentarians urge to be guided by the RA Constitution,  according to which the issues related to changing the territory of  the Republic of Armenia are resolved exclusively through a  referendum. It is unacceptable for the RA to sign any document  implying the inclusion of the Republic of Artsakh in Azerbaijan, the  statement says.

The statement also calls on the Armenian government to refrain from  any negotiations, written or oral agreements that violate the  requirements of the RA Constitution and the will of the Armenian  people, which is expressed in the Declaration of Independence, to  provide the National Assembly with reliable parliamentary information  and to ensure maximum publicity in matters of reforms in the  country's Armed Forces and concerning the safety of the RA.

Head of the "Civil Contract" faction Hayk Konjoryan stated that the  political majority received the draft statement on October 26, in the  afternoon, when the two opposition factions prepared the statement in  full.  "The political majority did not participate in any way in the  development process," he said.  According to the MP, despite the fact  that they received the draft statement yesterday rather late, they  tried in cooperation with their colleagues to work out a consensus  version of the draft, but this did not succeed.

"We do not see problems with the provisions and theses in the draft,  which relate to the war unleashed by Azerbaijan, war crimes and  inhuman actions of Azerbaijan. "Moreover, the parliamentary majority  in all ways and the executive power at all levels are fighting for  the international coverage of the above- mentioned issues and for  their solution," Konjoryan said.

At the same time, according to the ruling faction, the statement also  contained statements with an internal political content, approaches  that are part of the political narrative of the opposition, which,  according to the Civil Contract, cannot be included in this  statement. The parliamentary forces could not reach a consensus on  the issue of excluding these provisions from the text of the  statement, he said. "Therefore, we will not take part in the voting,"  Konjoryan said.

As a result, 26 MPs voted for the adoption of the statement.