Armenian Ambassador: The presence of Russian peacekeepers in  Nagorno-Karabakh is a key security factor 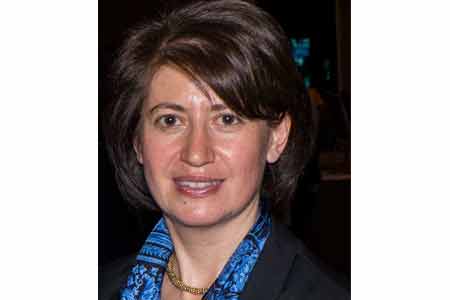 ArmInfo.The presence of Russian peacekeepers in Nagorno- Karabakh is a key security factor, and Armenia provides all the necessary conditions for the smooth  operation of the peacekeeping mission, unlike Azerbaijan, which uses  every opportunity to question the effectiveness and appropriateness  of the presence of the contingent. Ambassador of Armenia to France  Hasmik Tolmajyan stated this in an interview to "CONFLITS" edition.

She recalled that Russia played a key role in ending the hostilities  against Artsakh last year and that at present, Russian peacekeepers  are on a mission in Nagorno-Karabakh, helping to ensure the physical  security of the people of Artsakh and the restoration of normal life.

At the same time, in her words, Armenia continues to remain and will  be the guarantor of the security of the people of Artsakh and will  defend the fundamental rights of the Armenians of Artsakh.

"The security of Artsakh is ensured by the Defense Army of  Nagorno-Karabakh. The Armenian government, in turn, spares no effort  to mitigate or eliminate the consequences of last year's war, in  particular, together with the leadership of Nagorno-Karabakh, it  implements urgent programs aimed at restoring economic activity and  solving social problems of the population of Artsakh ", the  Ambassador said.

To clarify the expediency of continuing the current struggle in  accordance with the international recognition of Artsakh, Tolmajyan  stated that at this stage the Armenian side is focused on eliminating  the humanitarian consequences of last year's war.

According to her, the issue of repatriation of Armenian prisoners of  war and other citizens illegally held by Azerbaijan is especially  urgent. According to her, the aforementioned persons are being held  in Baku in violation of the trilateral statement of November 9, 2020  and international humanitarian law, moreover, refusing to return  them, Azerbaijan does not hide that it uses this issue for political  bargaining.

"We are very concerned about this issue, since it has been documented  that Armenian prisoners of war in Azerbaijan are daily tortured on  the basis of ethnicity. As for your question, the issue of the status  of Nagorno-Karabakh was and remains one of the key issues in the  settlement of the conflict, which has not yet been resolved. Armenia  will decisively seek to resolve the issue of the status of Artsakh  under the auspices of the OSCE Minsk Group co-chairs, and will  consistently promote the need for self- determination of the people  of Artsakh, the realization of the right to live freely and with  dignity in their homeland," the Armenian Ambassador to France said.  In this context, Tolmajyan recalled that the first anniversary of the  historic resolution of the French Senate on "the need to recognize  the Nagorno-Karabakh Republic" will soon be celebrated. According to  her, this resolution, as well as a similar resolution of the French  National Assembly, demonstrated that the French Republic and French  society are not indifferent to the Armenian people in the conditions  of the aggression of the Azerbaijani-Turkish forces, they support a  fair and peaceful way of resolving the conflict. The diplomat also  pointed out the importance of these resolutions for clarifying the  international status of Nagorno-Karabakh and, therefore, for  protecting the right of the people of Artsakh to self-determination.  Referring to the activities of the OSCE Minsk Group, Tolmajyan agreed  that the co-chairs, despite the efforts and attempts to achieve a  ceasefire, could not prevent and quickly stop the war against Artsakh  unleashed by Azerbaijan with the participation of Turkey and  international militants last year.   "Despite this, at present there are favorable conditions for the full  restoration of the work of the co-chairs, which Armenia only  welcomes. The Minsk Group co-chairs are endowed by the international  community with a mandate to resolve the Nagorno-Karabakh conflict,  and one of the key issues, as I have already mentioned, is the status  of Nagorno-Karabakh, which remains unresolved.Consequently, the Minsk  Group co-chairs play an important role in this issue. The meeting of  the foreign ministers of Armenia and Azerbaijan in New York in  September under the auspices of the Minsk Group co-chairs was the  first step towards the full restoration of the settlement process.  Armenia welcomes the holding of this meeting and hopes that contacts  with the participation of the co-chairs will continue, "the  Ambassador said, adding that Armenia greatly values the participation  of France in the format of the co-chairmanship of the Minsk Group.   In her words, France has an all-encompassing constructive and  balanced influence on the settlement of the Nagorno-Karabakh conflict  in this format, and this is highly appreciated in Armenia.