Amirabdollahian: Relations between Tehran and Baku are developing in  the background of mutual respect 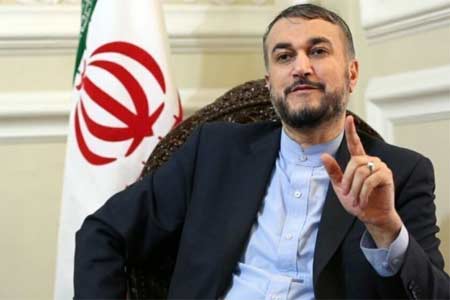 ArmInfo.After a telephone conversation with his Azerbaijani counterpart, Iranian Foreign Minister Hossein Amirabdollahian said that relations between Tehran  and Baku are developing in the background of mutual respect.

"The Islamic Republic of Iran and the Republic of Azerbaijan are two  Muslim neighbors that have a lot in common," he tweeted.

At the same time, he stressed that he had a frank, warm and  constructive conversation with him about the roadmap for  comprehensive relations.

"During a telephone conversation, Amirabdollahian stated that Tehran  is determined to deepen relations with Baku," the press service of  the country's foreign ministry said, IRNA reports.

The Iranian Foreign Minister thanked his colleague for the release of  two Iranian drivers "arrested in Azerbaijan" (on the Goris-Kapan road  of the Syunik region of Armenia, Ed. note) and called this action a  constructive step that could provide the necessary basis for further  resolving misunderstandings.

The parties stressed the importance of resolving all disagreements  through dialogue. The foreign ministers also discussed other issues  of mutual interest.

It should be noted that the stumbling block between Baku and Tehran  was the actions of the Azerbaijani security forces against the  Iranian trucks on the Goris-Kapan road of the Syunik region of the  Republic of Armenia, 21 km of which were under the control of the  Azerbaijani side in September this year. The Azerbaijani side is  demanding $ 200-400 from Iranian drivers for travel through this  section as a customs fee. Moreover, two Iranian drivers were detained  for allegedly delivering cargo to Nagorno-Karabakh.  They were  released on October 21st.