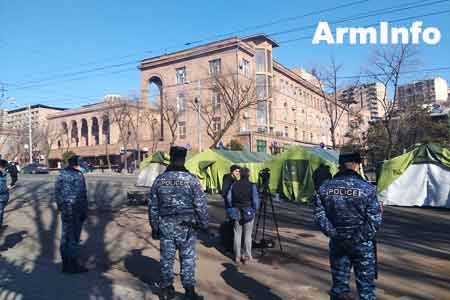 ArmInfo. The opposition announced the resumption of anti- government protests on the  anniversary of the signing of the infamous trilateral statement  between the leaders of Armenia, Azerbaijan and Russia.

This statement was made after the reports in the media that on  November 9 a meeting of the leaders of Armenia and Azerbaijan is  planned with the mediation of Russia, at which a peace treaty will be  signed, which, among other things, involves the start of the process  of demarcation and delimitation of the border.  The informational  stuffing was made through the website of former adviser to the RA  Prime Minister Arsen Kharatyan.

In this regard, representative of the ARF- Dashnaktsutyun Supreme  Body,  MP from the opposition "Armenia" bloc, Ishkhan Saghatelyan,  said that he had informed the Yerevan Municipality of their intention  to hold rallies on November 9 and November 10 at Freedom Square from  6:00pm to 8:30pm, in turn, the metropolitan Municipality noted that  the information was taken into account.

According to him, there are various proposals on the format of the  meetings, which are under discussion.  "I would also like to  emphasize that rumors on this topic, spread by certain circles, are  clearly provocative and do not correspond to reality. To properly  understand the situation, I would recommend studying the news,  statements," revelations "that preceded the trilateral meeting in  Moscow on January 11, 2021, get acquainted with the results and  content of the meeting, as well as analyze how much truth there is in  these claims, that were spread before the meeting, , "Hunanyan said.

He recalled that Prime Minister Pashinyan has repeatedly stated the  readiness of the Republic of Armenia to resume high-level talks on  the settlement of the Nagorno-Karabakh conflict with Azerbaijan  within the mandate of the co-chair of the OSCE Minsk Group.

The representative of the RA Foreign Ministry also drew attention to  the fact that according to the statement of January 11, 2021, Armenia  is participating in trilateral (Armenia, Russia, Azerbaijan) working  discussions on unblocking transport communications in the region.  "Since May 2021, the idea of withdrawing the units of the Armed  Forces of Azerbaijan from the territory of the Republic of Armenia  and the possible start of the process of demarcation and delimitation  of the borders between Azerbaijan and Armenia, which has not been  implemented so far, has been discussed in a trilateral format.  The  readiness to provide consultative assistance in the process of  delimitation and demarcation of borders and the opening of regional  communications was expressed by two other co-chairing countries of  the OSCE Minsk Group - the United States, France, and the European  Union.

The Armenian government announced the aforementioned agenda a few  months ago, and will consistently promote it, as well as protect the  interests of the Republic of Armenia and Artsakh, ensure the  establishment of long-term peace and stability, "Hunanyan summed up.