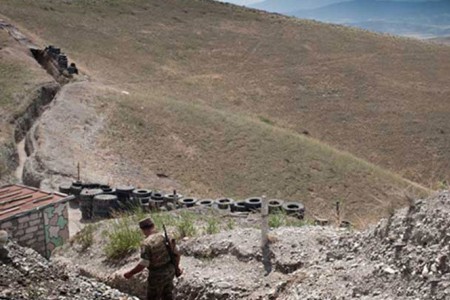 ArmInfo.Armenian border guards continue to serve on Mount Pela. This is stated in the message of the National Security Service of Armenia.

"In response to the information spread by some media that Mount Pela in Kapan was  allegedly transferred to Azerbaijan, the National Security Service of  the Republic of Armenia reports that there were no positional changes  in the area called Mount Pela in Syunik region. The border troops of  the RA NSS continue to serve in this section of the state border,  "the RA NSS statement says.

It should be noted that on Saturday MP from the Hayastan bloc Anna  Grigoryan announced that the Armenian authorities are going to  transfer Mount Pela under full control of Azerbaijan, because of  which the residents of several villages of the Kapan region will be  directly targeted by the Azerbaijani Armed Forces. "In fact,  Azerbaijan no longer needs to arrange provocations, since the  Armenian authorities are ready to give them anything and not resist,"  she wrote.

Already today, head of the Kapan community, Gevorg Parsyan, told the  Armenian media that the mountain completely came under the control of  Azerbaijan, as a result of which the road was blocked, which also  served the residents of the adjacent villages. He also noted that the  agreement on the delivery of the height was reached in the winter of  2021, although even according to Google maps, most of the height is  located on the territory of the Republic of Armenia.