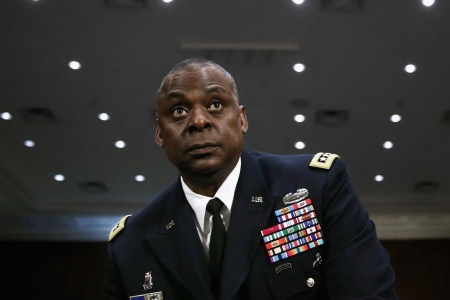 The Pentagon Chief said this in Tbilisi, answering a  question about Georgia's possible participation in the "3 + 3"  initiative in the South Caucasus. Before talking about any new  platform, Russia must fulfill the 2008 ceasefire agreement, "Austin  said, accusing Russia of "occupation." Speaking about the memorandum  signed today with the head of the Georgian defense department, Austin  said that the document "once again testifies to the deepened  cooperation between the two countries in the defense and other  sectors." When asked about the purpose of his visit to Tbilisi, the  Pentagon chief said that he wanted to emphasize "good partnerships  between countries."

According to him, the United States highly values Georgia as a strong  strategic partner. At the same time, the U.S. Secretary of Defense  spoke about the new Defense and Containment of Georgia Initiative.  "Today I have the honor to announce Georgia Defense and Deterrence  Enhancement Initiative together with the Georgian Defense Minister.  This initiative will become central to cooperation between the US  Department of Defense, on the one hand, and the Georgian Ministry of  Defense and the Georgian Defense Forces, on the other. This marks a  truly new an exciting phase in bilateral security cooperation between  our countries. We will definitely take advantage of Georgia's defense  program and continue to support institutional reforms in the defense  sector. We will strengthen the capabilities and skills needed for  effective deterrence and defense. We will also support Georgia's  ability to engage with NATO", said Lloyd Austin, Georgia-online  reports.

Earlier, at a joint press conference with Iranian Foreign Minister  Hossein Amir -Abdollahiyan, Russian Foreign Minister Sergei Lavrov  said that the parties discussed the possibility of creating a "3 + 3"  format.  As the Russian minister noted, the Iranian side expressed a  positive attitude towards this idea, the same attitude is observed in  Azerbaijan and Turkey. The Russian Federation is working with  colleagues from Armenia, and also hopes that Georgia will be able to  see its fundamental interest in creating such a mechanism.

In turn, Georgian Foreign Minister David Zalkaliani, commenting on  Lavrov's statement, noted that it would be difficult for Tbilisi to  participate in the "3 + 3" format together with Russia, nevertheless,  the country should be represented in some form in large geopolitical  projects.