Moscow: Georgia has not yet officially responded to the proposal to  create a "3 + 3" format for the Transcaucasus 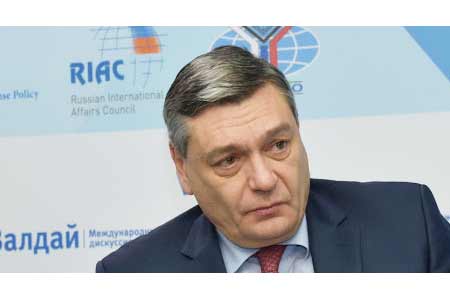 ArmInfo.Georgia has not yet officially responded to the proposal to create a "3 + 3" format for the Transcaucasus. Russian Deputy Foreign Minister Andrei Rudenko  stated.

"Georgia has not officially reacted. But recently Georgia has  declared its disinterest in participating in this mechanism," Rudenko  said in an interview with journalists, Russian media reported.

At the same time, he stressed that Russia views the mechanism as a  very important, forward-looking and promising format where regional  security issues can be discussed with the participation of regional  states.

Earlier, Russian Foreign Minister Sergei Lavrov said during a joint  press conference with Iranian Foreign Minister Hossein  Amirabdollahian that the parties discussed the possibility of  creating a "3 + 3" format.  As the Russian minister noted, the  Iranian side expressed a positive attitude towards this idea, the  same attitude is observed in Azerbaijan and Turkey. The Russian  Federation is working with colleagues from Armenia, and also hopes  that Georgia will be able to see its fundamental interest in creating  such a mechanism.

In turn, Georgian Foreign Minister David Zalkaliani, commenting on  Lavrov's statement, noted that it would be difficult for Tbilisi to  participate in the "3 + 3" format together with Russia, nevertheless,  the country should be represented in some form in major geopolitical  projects.