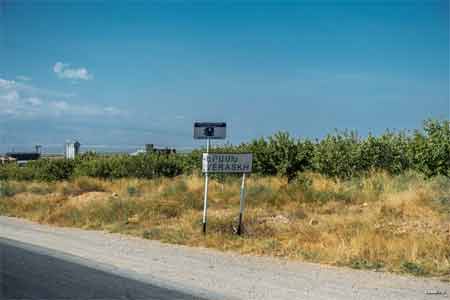 ArmInfo.The Azerbaijani Armed Forces fired at the Yeraskh village of the Ararat region and the Armenian positions deployed in this area, the press service of the RA  Defense Ministry reported.

" On October 15, at around 3:00pm, units of the armed forces of  Azerbaijan, opened fire on the Yeraskh village of the Ararat region  and the Armenian positions deployed in this area. As a result of the  shelling, haystacks and a barn belonging to one of the villagers were  burnt. There are no casualties among the personnel of the Armenian  Armed Forces and the civilian population, "the statement of the RA  Defense Ministry says.

To recall, yesterday, on October 14 in Minsk, on the initiative of  the Russian side, a meeting was held between the foreign ministers of  Russia, Armenia and Azerbaijan - Sergei Lavrov, Ararat Mirzoyan and  Jeyhun Bayramov. "Taking into account the approaching anniversary of  the adoption of the Statement of the leaders of Russia, Azerbaijan  and Armenia of November 9, 2020 on a complete ceasefire and all  hostilities in the zone of the Nagorno-Karabakh conflict, a review of  the implementation of the trilateral agreements was carried out. It  was stated that most of the provisions of this Statement are being  successfully implemented. It was agreed to intensify work on the  remaining issues.

The Russian side welcomed the mutual disposition expressed by the  leadership of Azerbaijan and Armenia to normalize relations between  the two countries. It reaffirmed her readiness to assist this process  in every possible way, both in national capacity and through the OSCE  Minsk Group co-chairs, "the Russian Foreign Ministry said in a  commentary.