Politician: The current Constitution forces Pashinyan to transform  into a dictator 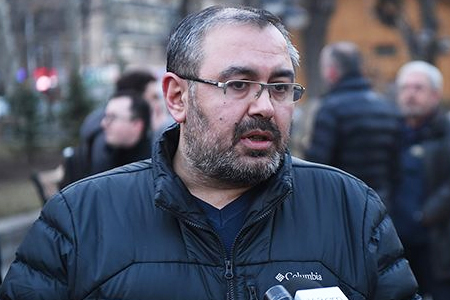 ArmInfo.As a result of the political processes that followed the change of power in 2018, the political field of Armenia was completely paralyzed. Politician Suren  Sahakyan expressed a similar opinion to ArmInfo.

"Coupled with the events preceding 2018, the current adjustments in  the country's Constitution are based on the interests of individuals,  but not on the interests of society and the state. The development of  political parties in the country is also not facilitated by the  current political thinking, disunity, and fragmentation of our  society. And after the latest parliamentary elections, in the context  of the current regulations, we will get political parties with  leaders who have the image of oligarchs. And this is at best, "he  predicts.

Commenting in this light on the expected reform of the Constitution,  Sahakyan noted that there is no alternative to this path. In his  opinion, positive shifts in the country, changes in relations within  society require changes in the Basic Law. The current Constitution,  according to the politician, was written for a completely different  type of social structure and was aimed at regulating the relations of  a completely different type of political system.  On August 18,  Armenian Prime Minister Nikol Pashinyan announced the government's  intention to hold broad discussions on constitutional reforms in the  country. In this light, the prime minister singled out the 44-day war  as a new stimulus for these discussions, in the light of the  emergence of many questions about the effectiveness and adequacy of  the current parliamentary system of government. Recall that on March  1, Pashinyan announced his intention to reform the Constitution in  October in order to return to the previous, semi-presidential system  of government.

In particular, Sahakyan sees a violation of the counterbalance and  deterrence mechanism by the current Constitution.  As a result,  following the results of the latest elections, the political force,  which won the support of less than half of the citizens who voted,  began to dispose of all three branches of public power: executive,  legislative and judicial.  Meanwhile, this state of affairs, in his  opinion, leads to a violation of the internal political balance. With  all the derivative implications.

In this light, the politician does not attach significant importance  to the changes in the system of government of the country after the  reform of the Constitution. In his opinion, it is not so much the  replacement of the parliamentary system with a semi-presidential or  presidential system that is important, but the restoration of the  mechanisms of checks and balances. Noting that it is easier to  achieve this under the conditions of a semi-presidential model,  Sahakyan at the same time stressed that the same goal can be achieved  by keeping the existing model.  "Under the current Basic Law, we will  either follow the path of restoring the previous system, which will  end with its equally inglorious end, or we will have to make it more  democratic. Public relations within the framework of the current  Constitution give political forces the opportunity to parasitize at  the expense of society. Moreover, they simply force the ruling force,  the Civil Contract party, to transform into a dictatorial system.  Well, the choice is up to the ruling party, or rather, one person -  Nikol Pashinyan, "Sahakyan summed up.