Expert: Armenia has absolutely no interest in transit through  Azerbaijan 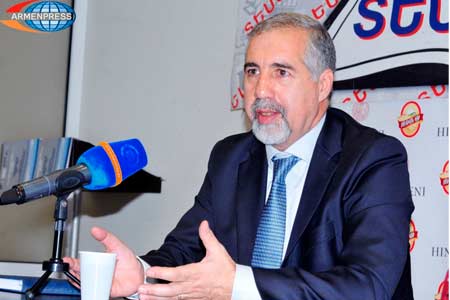 ArmInfo.After the commissioning of the tunnel under construction in Georgia in the direction of Russia, the prospect of the transit of Armenian goods through the  territory of Azerbaijan will not be of any interest at all. Gagik  Aghajanyan, Executive Director of the Apaven transport-forwarding  company, expressed a similar opinion to ArmInfo.

"I am telling you- communications through Azerbaijan to Russia are  not of interest to us now. Moreover, these communications have never  been competitive from a logistic point of view. In other words, the  whole question for us rests on the lack of economic feasibility. I am  simply convinced that no one will send goods through Azerbaijan,  neglecting the cheaper Georgian route, "he stressed.

Commenting on the need to unblock all transport and economic  communications in the region, voiced recently by RA Prime Minister  Nikol Pashinyan, in particular, to open communications for Armenia  through Azerbaijan in the direction of Russia, Central Asia and Iran,  Aghajanyan noted that first of all, it is necessary to ask a question  whether Armenia has any goods to export to Central Asia? In this  light, he noted that Armenian companies do not have the opportunity  to fully fill free niches even in the Russian market. Based on the  existing production capacities in Armenia, the expert is convinced  that unblocking communications through Azerbaijan is absolutely  futile for Armenia.

In this light, according to Aghajanyan, the question arises - why and  for whom does Armenia open communications and can it get something in  return? Especially in the light of the absence of any prospects for  the commissioning of the existing railway from Nakhchivan and further  through the territory of Armenia to Turkey. According to him, this is  being spoken about quite openly. Moreover, the Turks and Azerbaijanis  today are building a railway bypassing Armenia, neglecting the  already built road on the territory of Armenia.

Meanwhile, having opened a 40-kilometer communication line for  Azerbaijan and Turkey through its own territory in the Syunik region,  Armenia, according to Aghajanyan's forecasts, will gain absolutely  nothing. First of all, due to the fact that only Turks and  Azerbaijanis will use this route. Even if we are talking about  communication controlled by Armenia, and not about the "corridor"  required by Baku.

"Any possibility of organizing transit, any logistic communication  has its price. Accordingly, Armenia needs to clearly define this  price and issue an invoice to those who are interested in this  opportunity. Only in this case, if our national interests are  observed, it seems possible to discuss these projects. Unblocking  communications, in the form in which it is proposed to us today, is  simply unacceptable. Providing neighboring countries, in addition to  the existing routes, one more opportunity to bypass and block Armenia  is unacceptable. Accordingly, it is not in the interests of Armenia,  "Aghajanyan summed up.