Armen Sarkissian: Armenia should have good relations not  only with  Russia, but with the West and East, with the North and South 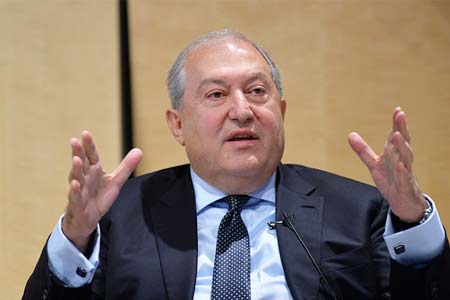 ArmInfo. Ensuring the inviolability of borders, efficient organization of the protection of  state borders, a fair decision on the status of Artsakh and the  return of Armenian prisoners held by Baku should become priorities of  Armenia's foreign policy. Armenia's President Armen Sarkissian stated  this on August 2, speaking at the opening of the first session of the  parliament of the 8th convocation.

According to Sarkissian, in order to have a bright future and not  become just history, Armenia must create institutions that educate  the appropriate politicians - statesmen. And for the outside world,  Armenia should be a mature, reliable, predictable partner that builds  good relations not only with Russia, but with the West and East, with  the North and South. "We have been given a historical opportunity  that must not be missed. We must abandon imitation and move on to  meaningful ones, otherwise, at best, we will remain on the margins of  history," he said, assuring that the presidential institute was ready  to provide all kinds of support in achieving these goals.

After the President's speech, the new MPs of the 8th convocation  vowed to serve the people and ensure the protection of Armenia's  sovereignty.

To recall, today, on August 2, the first session of the newly elected  National Assembly of Armenia of the 8th convocation started in  Yerevan. The meeting began with a minute of silence in memory of  those killed in the 44-day war in Artsakh.

There are 107 MPs in the parliament of the 8th convocation:  The  parliament of the 8th convocation will have 107 MPs: the "Civil  Contract" party will have 71 mandates, the " Armenia " bloc - 29, the  "I Have Honor" bloc (Republican Party of Armenia and Arthur  Vanetsyan's "Hayrenik" party,  Ed. note) - 7.  Representatives the   opposition came to the parliamentary session in white T-shirts with  black-and-white photographs of their comrades with the words  "political prisoners" printed on them.