Expert: The main goal of the United States and Great Britain was the  final defeat of the Armenian forces in Artsakh, its complete capture  and Russia`s withdrawal from Armenia 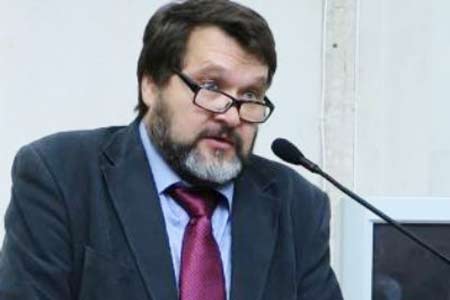 ArmInfo. The current situation in the South Caucasus has been forming since the last years of the existence of the USSR. And throughout this period, at its various  stages, in particular, after the failure of Mikheil Saakashvili's  military adventure in South Ossetia in 2008, the integration of the  region with the Euro-Atlantic community continued to be the main goal  of the US regional policy.

Alexander Krylov, Chief Researcher at the  Center for Development and Modernization of the Institute of World  Economy and International Relations of the Russian Academy of  Sciences, Dr. of Science (History) expressed a similar opinion to  ArmInfo

"Against this background, the situation contributing to a radical  revision of Armenia's foreign policy in favor of NATO could only be  the result of the normalization of relations between Yerevan and Baku  and Ankara. Nevertheless, the result of the non-public work of the  United States - the Zurich Protocols obviously did not lead to the  planned outcome. The reason is the lack of understanding by American  strategists on the Caucasus of the peculiarities of interethnic  relations and the role of history in determining public sentiments,  in Armenia as well as in Azerbaijan and Turkey, "he stressed.

As a result, according to the Russian expert, it was the United  States, with the aim of the long-desired reformatting of the South  Caucasus, that initiated the breakdown of the military-political  balance of forces in the region and the status quo of 1994,  destabilizing the situation in the Karabakh conflict zone. And the  unfavorable outcome of the 44-day war for Artsakh and Armenia was  predetermined by the overwhelming military-political,  information-propaganda advantage achieved by Baku with the support of  Ankara.

Krylov, referring to the opinion of Armenian and Russian experts and  politicians, recalled that the main goal of the United States and  Britain, which was on the catch-up, was not only the final and quick  defeat of the Armenian army and the complete capture of Artsakh. The  plan was developed with the prospect of a change of power in Armenia  in the wake of popular indignation. That would be accompanied by an  accusation against Russia of treason and a mandatory requirement for  the withdrawal of the 102nd Russian base from Gyumri.

Nevertheless, the initiators of this scenario, according to Krylov's  estimates, failed to achieve their goal primarily due to the stubborn  resistance of the Armenian military in Artsakh, which significantly  delayed the hostilities, in fact, disrupting the Azerbaijani  blitzkrieg. In his opinion, this gave Russia time to achieve a  cessation of hostilities and the formation of a trilateral dialogue  with the leaders of Armenia and Azerbaijan. Thanks to this, Yerevan  managed to avoid the implementation of the Georgian and Ukrainian  scenarios and with the support of Moscow retain independence in  decision-making.

"It is necessary to understand that the deployment of Russian  peacekeepers in Artsakh today is a guarantor of the security of its  inhabitants. And it contributes to the successful economic  development of the entire South Caucasus. We are talking about  unblocking borders, building new transport corridors, etc. It is  economic cooperation that can give a start to the process of  increasing the level of trust in solving the most painful problems in  the Armenian-Azerbaijani relations, "he stressed.

At the same time, Krylov noted that the prospects for the development  of the region today are also becoming unpredictable due to global and  often contradictory regional factors. In this light, the expert notes  that with an increase in the degree of tension in international  relations in general and in relations between Russia and the United  States in particular, it will become even more difficult to stabilize  the situation in the South Caucasus. Moreover, such a scenario,  according to his forecasts, is fraught with a high probability of new  wars in the region