Analyst: Turkish revisionism takes on new shapes in the Caucasus 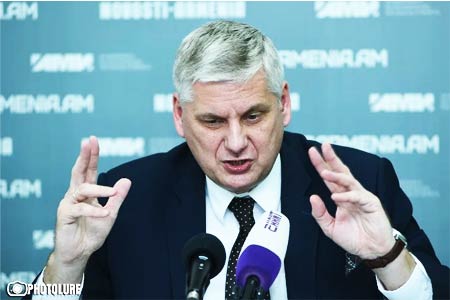 ArmInfo. On June 15, on the day of the signing of the "Declaration of Allied Relations" in Shushi, the city acquired an additional symbolic function - a demonstration of  Turkish- Azerbaijani unity. A similar opinion was expressed to  ArmInfo by a leading researcher at MGIMO of the Russian Foreign  Ministry, editor-in-chief of the International Analytics magazine  Sergei Markedonov.

"However, it is important and necessary to emphasize here that a new  level of military-political and economic relations and partnership  between Ankara and Baku is by no means only declared. It is being  implemented in practice. And it has been implemented for a long time.  In the post-Soviet period, many bilateral agreements and multilateral  documents were signed between Turkey and Azerbaijan,  precisely on  the basis of the strategic proximity of the two countries, "he  stressed.

Thus, Turkey, which strengthened its positions in the South Caucasus  following the results of last year's war between Armenia and  Azerbaijan, according to the analyst, is by no means a new player in  the region.  Having recognized the independence of Azerbaijan the day  after the official registration of the collapse of the USSR, Turkey  consistently supported Azerbaijan's position on the Karabakh  settlement, in military and state development. However, it was the  44-day war, according to Markedonov, that allowed Turkey to become  the first state outside the post-Soviet space to openly intervene in  the post-Soviet ethnopolitical conflict.

"Thus, having violated the tacit taboo on non-interference in the  situation in the regions of" special significance "for Moscow, Ankara  today is actually a major player in the Caucasus. Moreover, not only  in Azerbaijan, but also in Georgia. As a major investor in the  Georgian economy, Turkey has serious religious influence on a number  of regions of Georgia. And now Turkish President Erdogan is making a  statement about the opening of a consulate in the "cultural capital"  of Azerbaijan, the organization of the production of drones in  Azerbaijan, " he stressed.  This state of affairs in the aggregate,  according to the analyst, is evidence of the formation of a  completely new quality of the Turkish presence not only in the  Caucasus, but also, in general, in Eurasia. In this light, Markedonov  suggested that by declaring itself in the South Caucasus, in general,  and in Karabakh, in particular, as a self-sufficient force, Ankara  indirectly, but responds to Russia's involvement in the Syrian  conflict in 2015. "It is important to note that repeatedly resorting  to revisionism in the Middle East and Africa, the Caucasus and the  Black Sea region, Turkey is no longer doing it as a NATO  representative, but as an independent Eurasian power, "Markedonov  concluded.