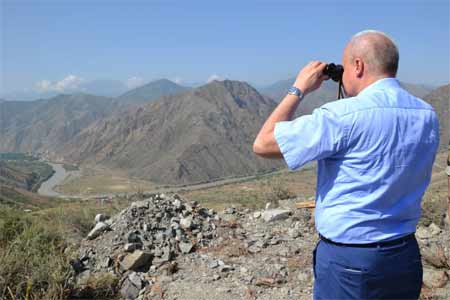 ArmInfo.Russian Ambassador to Armenia Sergey Kopyrkin commented on the possibility of deploying Russian border guards at the Armenian-Azerbaijani border in the  Gegharkunik region of the Republic of Armenia.

So, on June 22, the Russian Ambassador, answering the question of  whether there is a specific timeline in connection with the  information about the deployment of Russian border guards on the  Armenian- Azerbaijani border, which the governor of Gegharkunik  region spoke about yesterday, in particular, said:

"There are already Russian border posts in Syunik, on those problem  areas of the Armenian-Azerbaijani border. As for further steps in  this regard, let's wait."

Referring to the elections in Armenia, Kopyrkin stated that  press  secretary of the Russian president Dmitry Peskov and official  representative of the Foreign Ministry Maria Zakharova in their  statements highlighted the Russian position.