Nikol Pashinyan: The people of Armenia made their decision - what was  expected happened 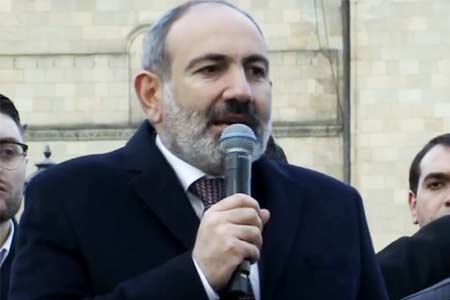 ArmInfo. The people of Armenia made their decision  - what was expected happened, head of the "Civil Contract" acting  Prime Minister Nikol Pashinyan party said, at a meeting with members  of the campaign headquarters after the publication of interim data  from polling stations for the elections to the new parliament, in  which the "Civil Contract" received 54% of the votes.

Pashinyan thanked the people of Armenia, who, having gone through  severe difficulties and "circles of hell", found the strength to  restore social and national solidarity. Pashinyan thanked the  residents of all regions of the country and the capital individually.  According to him, if in 2018 a non-violent "velvet" revolution took  place, now there was also a democratic, but already "steel"  revolution, and all the agreements that were reached during the  election race between the "Civil Contract" party and the voters will  be turn into reality step by step.

Pashinyan said that he would definitely begin consultations with  healthy political forces that took part in the elections in order to  determine a policy for the further development of the country in all  areas of life, and to consolidate public potential in order to solve  the problems facing the country.

Pashinyan thanked all foreign and international observers for their  assistance in holding the elections, as well as personally the  leaders of Russia, the United States, France, Iran, Georgia and the  European Union for the assistance provided to Armenia in a difficult  period. He also thanked the leadership of the Nagorno- Karabakh  Republic and expressed confidence that joint work would help protect  national interests.

Pashinyan thanked the leaders of the EAEU and CSTO countries and  expressed confidence that Armenia will further deepen and develop  cooperation with these bosdies. In conclusion, Pashiyanyan read by  heart another psalm from the Bible to those present, which he had  recently done periodically at meetings with voters