Mevlut Cavusoglu touched upon the elections in Armenia 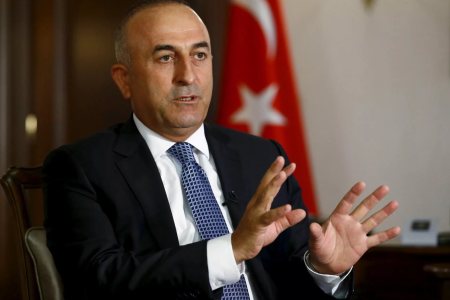 ArmInfo.Turkish Foreign Minister Mevlut Cavusoglu touched upon the elections in Armenia at a press conference on the occasion of the completion of the Diplomatic  Forum in Antalya.

Thus, the Turkish diplomat expressed hope that the new government of  Armenia formed following the elections "will learn a lesson from the  mistakes made by this country in the past."

In his words, Armenia must take steps to ensure stability in the  region.

"We hope that Armenia will understand that the only way to ensure  stability and peace in the region is to develop good-neighborly  relations with regional countries. Armenia should stop making  territorial claims to its neighbors and start establishing good  relations with them. After the war, as a result of which Azerbaijan  , both Baku and Ankara are decisively  ready to take steps to ensure peace and stability in the region, "the  minister said, apparently forgetting that territorial claims are put  forward by Turkey and Azerbaijan, and Armenians are only fighting for  the right to live on their own land.

Cavusoglu noted that the establishment of bilateral relations will  create an opportunity for the implementation of many regional  projects.

"This is primarily for the good of Armenia itself, which for many  years has been conducting a wrong policy and thus isolated itself. It  lagged behind in development from the countries of the South  Caucasus, but only through its own fault. Yerevan should abandon its  hostile attitude and think about what can be done to establish  good-neighborly relations with the countries of the region,  "Cavusoglu said cynically, Anadolu reports.