Georgian political scientist: We must move forward in a direction  beneficial for us, not for the United States, Russia or Turkey 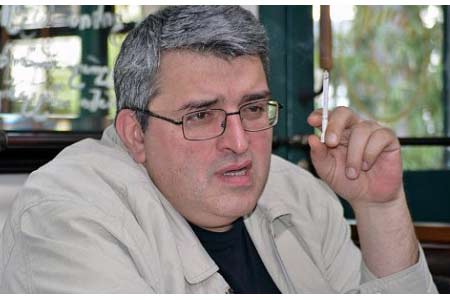 ArmInfo. Joe Biden administration's slogan "America is back" may have a practical  meaning in the South Caucasus as well, and we will face opposition  from Moscow, which does not intend to part with its own monopoly on  resolving all issues in our region practically alone.

However, in any case, both Armenia and Georgia should proceed in their actions  solely from their own national interests. We must move forward in a  direction that is beneficial for us, and for the United States,  Russia or Turkey. A similar opinion was expressed to ArmInfo by the  head of regional programs of the Georgian Strategic Analysis Center  (GSAC) Gela Vasadze.

According to Vasadze's estimates, this should be done in small but  consistent steps. First of all, in the direction of building a solid  security structure, on which it will already be possible to build a  lasting peace in the region. The path, in his opinion, is a long one,  and in order to successfully pass it, the political will of the  leaderships of the countries is necessary in order to overcome the  opposition of the opponents of the establishment of this very peace,  both external and internal ones. Vasadze considers such a path  extremely difficult, but quite possible.

In this light, the Georgian political scientist sees the need for  small, but quite concrete steps towards the formation of the  structure of regional relations in the format of the three South  Caucasian countries. In Vasadze's opinion, such a scenario sounds  extremely optimistic, however, if the leaders of the three countries  have a desire to significantly improve the living standards of their  own citizens, it is such a structure that will be the best catalyst  for the growth of the well-being of the entire region.

In Vasadze's opinion, background, but extremely important factor is  the presence in the South Caucasus of two competing regional projects  of two strategic opponents - Russia and Turkey. This can be explained  by Moscow's awareness of the importance of restoring its influence  within the borders of the former USSR as the only serious trump card  for its positioning in the modern world over the United States,  Europe and China. Without this influence, Russia, according to the  political scientist, is of no interest to anyone. And realizing all  this perfectly, it acts in the same South Caucasus in the appropriate  way.  For Turkey, in turn, successful integration with the countries  of the region, in Vasadze's opinion, opens up the prospect of  entering the Turkic states of Central Asia with the spread of its  influence to Chinese Xinjiang. And for obvious reasons, this project,  according to his forecasts, will inevitably face tough opposition  from China and, of course, Moscow. Therefore, it is possible that  this project will be supported by the United States and the European  Union.  "And I don't think that today it is worth counting on the  fact that today's Turkey does not have the resources to implement  such grandiose geopolitical projects. Recep Erdogan plays in the long  term.

Accordingly, as soon as his project, which today is in its infancy,  acquires real outlines, resources will inevitably appear. It is  important to emphasize that in this case it will not matter at all  who will be in power in Turkey Erdogan or his political competitors.   The main thing is that such a development path is dictated by the  logic of Turkey's development as a regional power" , summed up  Vasadze.