Helga Schmid: OSCE will actively participate in regional cooperation  in the South Caucasus 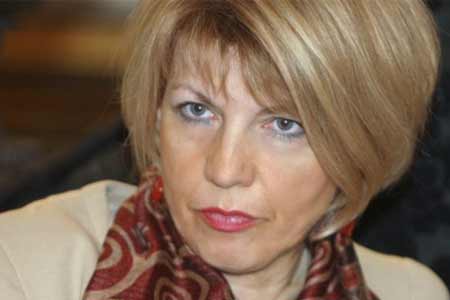 ArmInfo. OSCE Secretary General  Helga Maria Schmid thanked the Georgian government for the mediation  between Armenia and Azerbaijan. Schmidt said this after a meeting  with the head of the Georgian Foreign Ministry.

The Secretary General noted that the goal was achieved thanks to the  effective cooperation of many parties. "I want to thank the Georgian  government for the assistance it has provided to its neighbors in  rebuilding trust between Armenia and Azerbaijan. It was an example of  extraordinary cooperation between various actors, including the OSCE  led by Sweden and the EU. We talked about regional cooperation in the  South Caucasus, in which the OSCE will continue to be very actively  involved, "said Schmid, Georgia online repoers.

To recall, on June 12, 15 Armenian prisoners of war were exchanged  for maps of the minefields of Aghdam through the mediation of  Georgia, the U.S. and the EU. At the same time, several hundred more  Armenians continue to be illegally held by Azerbaijan after the  signing of a ceasefire statement on November 9, 2020. One of the  conditions in the document was the exchange of all for all prisoners  of war and detainees between Armenia and Azerbaijan.