Karabakh conflict on the agenda of the Biden-Putin meeting 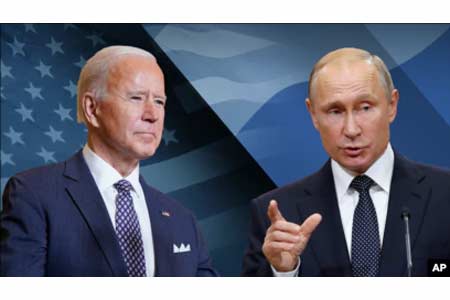 ArmInfo. Presidents of Russia and the United States Vladimir Putin and Joe Biden in Geneva will discuss issues of strategic stability, the fight against COVID-19,  combating cybercrime, as well as regional problems, including the  situation in the Middle East, Ukraine, Nagorno-Karabakh, Aide to the  President of the Russian Federation Yuri Ushakov told reporters.

According to him, the heads of state will discuss strategic  stability, a pandemic, the fight against cybercrime, cooperation in  the economy, the topic of climate change and the problems of the  Arctic.

"Conflicts in Ukraine, Syria, Libya, Afghanistan and Nagorno-Karabakh  are also on the agenda. Putin and Biden will discuss the detention of  Russians in third countries, the work of diplomatic missions and  general issues of relations between Russia and the United States. It  is noted that if the two presidents agree, the ambassadors of the  countries can return to Moscow and Washington, "Ushakov said, RIA  Novosti reports.

At the same time, he added that both parties can start talking on any  topic not agreed in advance. "Among them may be the situation in  Belarus, and the topic of Alexei Navalny. There were no special  problems in coordinating the topics," he stressed.

Biden and Putin will meet on June 16 at the Villa La Grange in  Geneva, Switzerland. For the first time, politicians will have a  face-to-face meeting since Biden took office. Putin's trip to Geneva  will mark the first foreign visit of a Russian president since  January 2020.