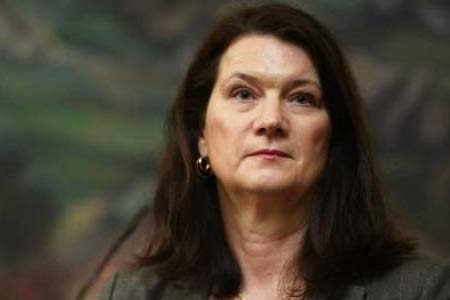 ArmInfo.The return of 15 Armenian detainees to Armenia and Armenia's handover to Azerbaijan of information that will facilitate important demining work, are welcome  confidence building measures, said OSCE Chairperson-in-Office,  Swedish Minister for Foreign Affairs Ann Linde.  "These important  steps bring the sides closer to dialogue, closer to stability, and  closer to a comprehensive settlement."

"I appreciate the valuable role played by the Georgian and US  governments, as well as the excellent co-operation between the  President of the European Council and the Swedish OSCE  Chairpersonship, ahead of the agreement. The developments are a vital  step also for regional co-operation in the South Caucasus," Minister  Linde noted.  Noting that core issues remain, Linde urged Armenia and  Azerbaijan to build upon these positive steps by releasing all  remaining detainees, and resuming high-level negotiations under the  auspices of the OSCE Minsk Group Co-Chairs and with the assistance of  the Personal Representative of the OSCE Chairperson-in-Office,  Ambassador Andrzej Kasprzyk, in order to find a comprehensive  political settlement to all outstanding issues.

It should be noted that yesterday Azerbaijan handed over 15 prisoners  of war to Armenia in exchange for maps of the minefields of Aghdam.  Acting RA Prime Minister said that this is not the first transfer of  minefields to Azerbaijan, the first one was back in December.  It is  worth noting that more than two hundred Armenian prisoners of war and  civilians continue to be illegally held in Azerbaijani captivity.  According to point 8 of the trilateral statement of the leaders of  Armenia, Azerbaijan and Russia of November 9, 2020, all prisoners of  war and prisoners of war were to be released immediately and without  preconditions. Meanwhile, against the background of the inaction of  the international community, Azerbaijan continues to speculate on  these issues and receive dividends.