Expert: Syunik is evidence of the need to revise Armenia`s foreign  policy 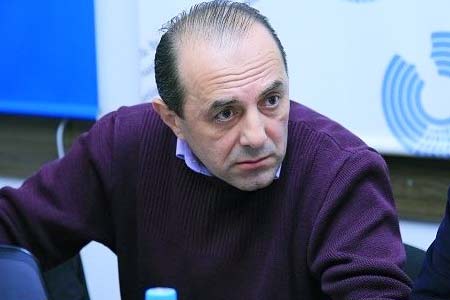 ArmInfo.The current crisis around the Syunik region has demonstrated the need to rethink, revise, and diversify Armenia's foreign policy in the field of security and  economy in all directions. An expert of the Armenian Institute of  International and Security Affairs Ruben Mehrabyan expressed a  similar opinion to ArmInfo.

"The matter concerns the harmonization of the interests of Armenia  with partners with whom our interests really coincide. And here, in  the context of security, the relations of Armenia with France, the  rest of the EU and the United States are of paramount importance.  Relations with Iran and India are very important for us. Especially  taking into account the emerging normalization of relations between  Tehran and the West. I think that this opens up vast prospects for  cooperation for our countries, "he said.  Mehrabyan considers the  extraordinary parliamentary elections to be the initial stage on the  way to overcome the crisis in Armenia and the challenges arising from  it caused by the coronavirus pandemic and the 44-day war. In his  opinion, it is a matter of existential importance how Armenia uses  this opportunity.

On May 26, 26 political forces intending to take part in the early  parliamentary elections on June 20 submitted their proportional lists  to the CEC. The official start of the election campaign is scheduled  for June 7. The list of the ruling Civil Contract party was, as  expected, headed by Nikol Pashinyan himself, but the places of Deputy  Prime Minister Tigran Avinyan and Yerevan Mayor Hayk Marutyan were  taken by the owner of the Sil Group concern Khachatur Sukiasyan and  another well-known businessman Gurgen Arsenyan.

According to the expert, by and large, the dividing line between the  political forces running in the elections is not so much between the  pro-Western and pro-Russian worldviews, but between the forces for  which the sovereignty and freedom of the country are an absolute  priority, and those for whom all these are just words.

According to Mehrabyan, all 30 years of Armenia's independence  demonstrate that all the former authorities, to one degree or  another, yielded the country's sovereignty in exchange for security,  ceded the most important economic assets, and replaced the state  administration system with a vertically integrated system of  corruption and criminal oligarchy.

"The problem is that today all these people not only have not  repented, but also do not hide their plans for revenge. All these  people serve someone else's agenda to the detriment of their own  country and are nothing more than the fifth column. In the upcoming  elections, they have the same political goal-revenge and the return  of the corruption rent, which they have enjoyed for years. For this  purpose, they will unite their efforts, putting aside their previous  and even current disagreements, "Mehrabyan summed up.