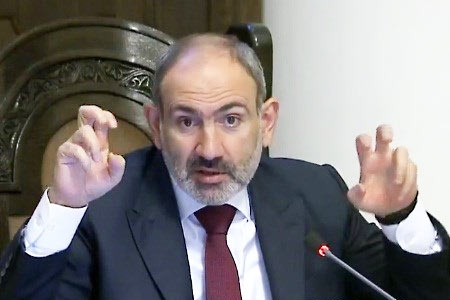 ArmInfo.The meeting of the Security Council of Armenia on the situation around Sev Lich (Black Lake) in Syunik has ended. The Chief of the General Staff of Armenia and the  Minister of Defense left the building of the RA Government in a  hurry.

Journalists' questions: "How did the Azerbaijani armed forces manage  to advance 3.5 km forward in Syunik?", "Where was the Armenian army  at that time?", " After all, this is the territory of Armenia",  the  security forces left unanswered.

To note, today, before the start of the meeting, acting Armenian  Prime Minister Nikol Pashinyan stated that the situation in Syunik  has not changed - Azerbaijani servicemen are standing by the lake,  and Armenian servicemen are also present in large numbers. At the  same time, Pashinyan was quick to note that the matter did not come  to a military escalation - there were no shootings and clashes, and  since yesterday, work has been underway to withdraw Azerbaijani  servicemen from the territory. What happened yesterday in Syunik, he  called a prepared provocation. "The Azerbaijanis had obviously  falsified maps with them, with the help of which they claim that they  are within the borders of Azerbaijan. The fact that those ones (maps,  Ed. note) are fake becomes obvious when they are compared with maps  of Soviet times, and the existence of fake maps indicates that we are  dealing with an organized provocation, "Pashinn explained. - sh -