Political scientist: Interest in keeping the OSCE Minsk Group afloat  is due to Russia`s desire to drag Azerbaijan into the EAEU 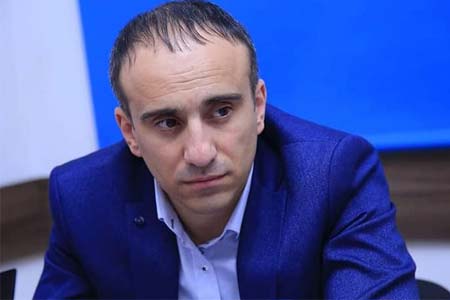 ArmInfo. The immediate prospects for the actions of the OSCE Minsk Group co-chairs entirely depend on geopolitics, in particular, on the vectors of geopolitical interests  of the main global and regional players. Political scientist Robert  Ghevondyan expressed this opinion to ArmInfo.

"Another important circumstance is the degree of rationality of  Yerevan and the orientation of its work exclusively to its own  interests. I think that if Armenia is able to take advantage of the  geopolitical positions of various players and international processes  in general, we will be able to achieve the expected solution to the  issue of Artsakh's status ", he considers.

Moreover, according to the political scientist, such purposeful work  of Yerevan, coupled with the internal political stability and  legitimacy of the authorities after the parliamentary elections  scheduled for June 20, will allow the country's leadership to raise  the issue of liberating the territories of Artsakh occupied by  Azerbaijan.

Returning to the prospects of resuming the work of the OSCE Minsk  Group, Ghevondyan linked its terms with the establishment of  stability in the international situation. According to him, the  attention of the superpowers to the Artsakh problem and all related  issues, including the resuscitation of the Minsk Group, requires and  is conditioned by the absence of other global international problems.  According to the forecasts of the political scientist, all these  developments will take place, however, as of today, it is impossible  to predict when exactly this will happen.

Thus, according to Ghevondyan's assessments, the return of the Minsk  Group undoubtedly proceeds from the interests of Armenia, since this  will allow returning to the issue of discussing the status of  Artsakh.  However, the same prospect, in his opinion, to a certain  extent contradicts the interests of Russia, which is still trying to  negotiate with Baku and Ankara. According to the political scientist,  we are talking about Moscow's desire to drag Baku into its own  integration projects with the prospect of restoring the union state.

"A number of statements from Moscow fully reflect Baku's approaches  to resolving the conflict. Again, this is due to Putin's serious  expectations of Aliyev regarding Azerbaijan's participation in  Russia's Eurasian projects, the latter demand from Moscow real steps  towards attracting Baku to its side. But on the other hand, Russia  cannot either reject the negotiation format of the OSCE Minsk Group  completely, or remove from the agenda the issue of determining the  status of Artsakh. First of all, because this is contrary to its own  interests as well, "he stressed.

In his opinion, to such interests are added quite good relations  between Russia and France against the general background, as well as  the fact that keeping the Minsk format afloat is an additional lever  in the hands of Moscow against Baku.

According to the political scientist, that is why Russia not only  does not refuse to participate in the OSCE Minsk Group, but also has  an interest in preserving it. First of all, due to the fact that  without the OSCE Minsk Group at hand, Moscow may not keep Baku in its  zone of influence, not to mention Azerbaijan's Eurasian prospects.