Expert: The situation around "Sev Lich" is evidence of the  disappearance of the last red lines in the merging of politics and  the media 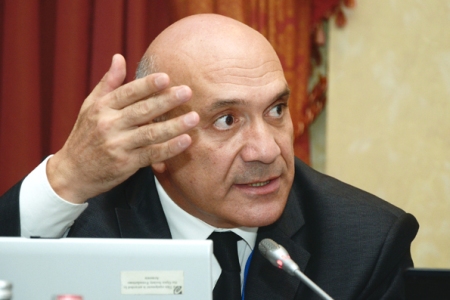 ArmInfo. The dissemination of manipulative, false information around yesterday's events in Syunik region is yet another evidence of the use of any informational  occasion in the internal political struggle. And the submission of  information by most of the Armenian media regarding the events around  Lake Sev Lich shows that even issues related to national security are  not an exception.  Chairman at Committee to Protect Freedom of  Expression Ashot Melikyan expressed a similar opinion to ArmInfo.

"I am convinced that in taking such actions, the leadership of  Azerbaijan, among others, is firmly guided by the desire to sow panic  in the Armenian society. The escalation of internal political tension  is part of Baku's plans. And by spreading misinformation, the  Armenian media, willingly or unwillingly, contribute to these plans  of the enemy, "he stressed.

To note, on the morning of May 12, the Azerbaijani armed forces  crossed the border in the area of Lake Sev Lich, deepening into the  territory of Armenia up to 3.5 kilometers in order to establish  control over the lake. In the evening of the same day, at a meeting  of the Security Council of Armenia, acting Prime Minister Nikol  Pashinyan described what happened in the Syunik region as a  subversive infiltration. He also assessed this situation as at least  close to a crisis. At the same time, throughout the day, various  Armenian media, referring to their own sources, disseminated  information about shootings, clashes and even casualties, both in  this section of the border and in the Gegharkunik region of the  country.

Thus, according to the expert, such publications in the Armenian  media are pursuing the main political goal - to demonstrate to the  society the inability of the current government to defend the  interests of the state. At the same time, the fact of harm to the  state and national security is absolutely ignored by the authors of  such publications. Meanwhile, any mass media must know that by  publishing information and photographs, for example, about the  movements of troops and military equipment, is grist to the enemy's  mill.

"Such information constitutes a military secret that must be  respected. In this light, the state needs to do extensive work in  order to prevent the leakage of such information. And, of course, it  is necessary to tighten and apply the relevant legislative  regulations. The media, in turn, should be responsible for  dissemination even reliable information, if the latter is a military  one, especially a state secret, "he is convinced.

"In the conditions of the election campaign, in the conditions when  the political struggle for power in Armenia has long migrated to the  media, unfortunately, the last red lines disappeared. In this light,  the spread of misinformation, the sharp "embellishment" of the  situation on the border by the media serving the interests of various  political forces will continue. And few people are interested in the  fact that our society suffers as a result of all this flow of lies,"  he stressed.

According to the expert, the situation around Lake Sev Lich, the  situation in the information field as a whole indicates the presence  of structures that clearly coordinate and reconcile their own actions  in information attacks in order to destroy their own political  opponent. At the same time, according to Melikyan, none of the  authors and participants of this information campaign is at all  interested in how their attacks affect the moral and psychological  state of the Armenian society.

"Unfortunately, with the approach of June 20, the date of the early  parliamentary elections, this whole situation will only worsen. And  the elections themselves will be accompanied by various pressures,  including physical violence. So, difficult times await us all, "the  expert forecasts.

Among the measures capable of alleviating the situation, Melikyan  also highlighted the prevention of the creation of an information  vacuum by the relevant state bodies. According to him, the state is  simply obliged not to allow a vacuum, at least in the coverage of the  most important issues. He noted with regret that the state very often  does not provide the society with verified and reliable information,  which opens up wide opportunities for disseminators of disinformation  and fake manipulators. "In this light, society needs to check any  information from several sources. It is also important to disseminate  reliable information by the small number of media outlets that today  generally have the right to be called that. It is important that such  media take on a heavy load, informing society about the realities,  and thereby refuting disinformation and preventing the spread of  manipulative information flows, "the expert summed up.