RA MFA: We are deeply concerned about the ongoing clashes in  Jerusalem 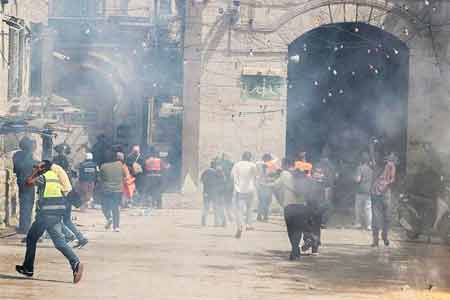 ArmInfo. We are deeply concerned about the ongoing clashes in Jerusalem. This is stated in the statement of the Armenian Foreign Ministry.

" We call on all parties involved to exercise restraint in order to  reduce tensions and prevent further civilian casualties," the  Armenian Foreign Ministry said.

Riots in the Old City of Jerusalem began on 22 April. Clashes also  took place on 7 May and resumed on 10 May. Israeli Prime Minister  Benjamin Netanyahu said that the world media distort and mistakenly  convey information about what is happening in East Jerusalem. The  Israel Defense Forces have suspended the Chariot of Fire exercises  for a day to "focus all efforts on preparing and preparing for  escalation scenarios," Chief of Staff Aviv Kochavi  told Reuters.  During the riots, more than 300 people, mostly Palestinians, were  injured.

Meanwhile, according to the media, one of the stumbling blocks in the  next aggravation of the Israeli- Palestinian conflict is the decision  of the Israeli court in two districts of East Jerusalem to evict  several Arab families - near the Temple Mount and in the Sheikh  Jarrah quarter. Because of this, riots broke out, which escalated  into clashes with the police.