Lawyer: The situation in the Armenian courts does not differ from the  one that existed 3 years ago 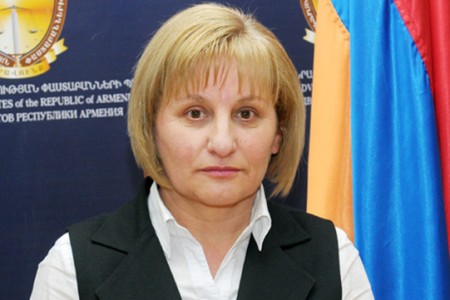 ArmInfo.Having committed a revolution in the spring of 2018, Nikol Pashinyan and the ruling force did not apply its canons in relation to the Constitutional  Court, courts and judges in general, investigative bodies, and even  in relation to the education system that forges their cadres.  The  expert of the Armenian Institute of International and Security  Affairs, lawyer Seda Safaryan, expressed a similar opinion to  ArmInfo.

"The only change was lifting executive control over the  aforementioned judicial authorities. The new government, unlike its  predecessors, refused to put any pressure on all these authorities.  In all other respects, there have been no positive shifts, and there  aren't any now. So we have to admit that apparently, the revolution  has not affected our courts. As a result, having received freedom,  the judges simply do not exercise their own functions. And only a  part of the judges, dissatisfied with the situation in the past,  behave adequately today. Which, in my opinion, is absolutely not  enough, "the lawyer emphasized.

According to her estimates it would be wrong to say that absolutely  nothing has been done in the justice sector. However, even as a  result of the ECHR's positive verdicts in cases of citizens of  Armenia against the Republic of Armenia, not a single judge was even  subjected to disciplinary action. In this light, the latest  statements by the Prime Minister of Armenia Nikol Pashinyan in the  parliament about significant shifts in the field of justice cause the  lawyer's bewilderment. Moreover, Safaryan is convinced that the prime  minister's optimism regarding the courts and Armenian justice is  obviously not shared by the Armenian society either.

According to the lawyer, democracy and freedom of speech in no way  imply permissiveness and the absence of any framework in the right of  citizens to express their own opinion. And the current situation in  Armenia in this regard, in her opinion, devalues many value systems.  And the same situation around the "Case of March 1", which, in her  opinion, was ruined by the courts, demonstrated the defeat of the  state in an attempt to restore justice in the country.

"Thus, the state is also responsible for this failure. And very soon  we will see dozens of new cases in the ECHR against the Republic of  Armenia. And then our prime minister will face rather not enviable  situation.  I am convinced that leaving criminals at freedom guided  by fear of being accused of political persecution is clearly not the  best way out in the implementation of justice. But the law should  work equally for everyone, both for the authorities and for the  opposition. And this does not take place in Armenia today, "Safaryan  is convinced.

"There are changes in the system of administration of justice, but  they are extremely insignificant. And I cannot say that justice has  been restored in Armenia or real steps have been taken to reform the  judicial and legal fields. My own cases in the courts, about which  the prime minister responds optimistically today, do not give me this  opportunity. In any case, the best criterion is popular opinion. And  if Pashinyan is really worried about the real situation in our  courts, then he has every opportunity to get to know it. Not within  the walls of parliament, but on the street. The situation in the  Armenian courts does not differ from the one that existed 3 years ago  and some people, for some reason being in a privileged position, are  simply not subject to legal liability, "the lawyer summed up.