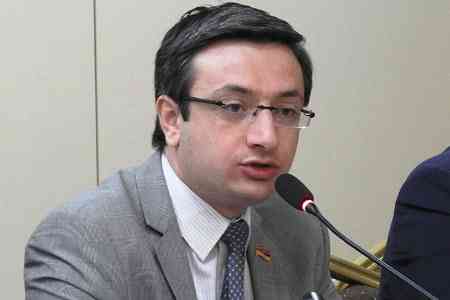 ArmInfo. Secretary of the "Bright Armenia" parliamentary faction Gevorg Gorgisyan answered the statement of the press secretary of the Chief of the General Staff of  the RA Armed Forces.

I would like to note that representatives of the "Bright Armenia"  party always speak with special respect and caution regarding the RA  Armed Forces, but this personal statement forces me to give an  appropriate answer, "Gorgisyan said.

The MP noted that as a member of the NA Standing Committee on Defense  and Security and the Commission investigating the circumstances of  the April four-day war, he can confidently assert that during the  work of the Commission enough facts were revealed to initiate a  criminal case against Artak Davtyan. According to him, in particular,  under Article 376 of the RA Criminal Code (dishonest attitude towards  service), and in case of disclosure of certain circumstances - and on  the basis of Article 299 of the RA Criminal Code (high treason).

"The pro-government lawmakers who worked in the commission and the  chairman of the commission Andranik Kocharian are well aware of this.  He even spoke about this. I would like to quote Kocharyan's words  verbatim:" Artak Davtyan, as the head of the operational department,  played a very bad role in the April hostilities 2016 ". If we add to  all this the actions of Mr. Davtyan during his tenure as Chief of the  General Staff of the RA Armed Forces, the reduction of the military  unit in Syunik, the ineffective acquisition of Su-30SM fighters, the  write-off of radio intelligence equipment for disposal as scrap  metal, as well as a number of well-known and unknown problematic  episodes of his previous activities, questions arise regarding the  compatibility of Artak Davtyan's tenure with the interests of the  Republic of Armenia, "the opposition MP noted, adding that all  statements of Bright Armenia members regarding Davtyan and his  activities are justified and even rather mildly presented.

At the same time, Gorgisyan expressed hope that the details of  Davtyan's activities will be studied after the change of power in  Armenia, within the framework of relevant criminal cases.  "Anarchy  and chaos in the country have intensified so much that subordinate  bodies began to swagger in relation to their superior," summed up  Gorgisyan.

It should be reminded that on May 5, in an interview with reporters,  the head of the Bright Armenia opposition faction Edmon Marukyan  noted that the conclusion of the investigation commission for  studying the events of the April 2016 war contains a number of gaps,  while promising to tell in more detail when it is clear which parts  of the report can be published.

"I can only say that if the current Chief of the General Staff Artak  Davtyan is one of the guilty of what happened, and this is so, based  on the report and statements made earlier by Andranik Kocharyan, then  he should not have occupied the post of Chief of the General Staff  today. This is an important signal for me of the absence of an  objective investigation. It turns out that one will not be accused  unless he is needed.  Those who are no longer needed or are in  "another camp" will be charged, "Marukyan said that the force led by  him will demand to declassify the report.

"The subjunctive mood of the lawmaker's statement is so baseless that  there is no need to mention it, but we urge him, speaking about the  chief of the General Staff of the Armed Forces, to be clear and  targeted.  Maybe the lawmaker and some members of his faction simply  have no idea about military affairs. This is their problem, which  does not give grounds to express unfounded thoughts. The large-scale  work carried out in the Armed Forces is largely inaccessible to the  public, and some MPs will be surprised to learn about it. Time will  tell who is doing the real thing and who is just talking, " Asatryan  noted.