Lavrov: Unblocking of transport communications will allow in practice  to end Armenia`s blockade and ensure mutually beneficial interaction  of all countries of the region 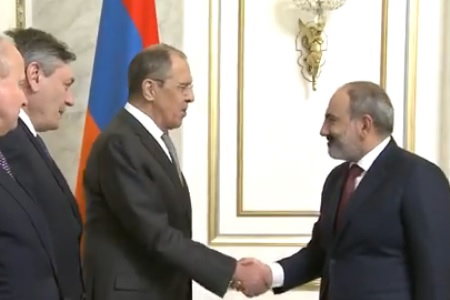 ArmInfo."Armenia will continue to take all measures to implement the agreements reached in the trilateral statements of November 9, 2020 and January 11, 2021,"  Acting Prime Minister of Armenia Nikol Pashinyan said on May 6 during  a meeting with Russian Foreign Minister Sergei Lavrov.

The relationship between Armenia and the Russian Federation, as  Pashinyan noted, is of an allied nature. "I am glad to state that in  recent months our relations have strengthened even more, having once  again passed the test of strength. In a difficult moment, the Russian  Federation extended a helping hand to us - it helped us solve the  problems caused by the pandemic and aggression against  Nagorno-Karabakh," he said.  According to Pashinyan, thanks to the  efforts of the Russian Federation, it was possible to achieve a  significant de-escalation of the situation in our region. "Today the  presence of Russian peacekeepers in Nagorno-Karabakh is a solid  guarantee of the security of Nagorno-Karabakh. I would especially  like to note the role of President Putin in achieving peace in the  region, as well as his efforts aimed at creating conditions for the  normal life of Nagorno-Karabakh," said Pashinyan.

In his words, the Armenian side is ready to make every effort to  ensure a constructive dialogue between the parties in a trilateral  format. According to Pashinyan, the actions of Baku, "which  manipulates the issue of extradition of prisoners of war, arranges an  anti-Armenian bacchanalia and presents territorial claims to  Armenia," are aimed at escalating the situation in the region and  disrupting the agreements.

At the same time, he noted with satisfaction the position of the OSCE  Minsk Group co-chairs, adding that their latest statement is, in  fact, a reaction to the destructive position of Azerbaijan. "The  opinion of the co- chairs, expressed in the statement of April 13, is  consonant with our position on the current main problems.  In this  regard, I want to emphasize our position on the need to resume the  peace process in order to achieve a final settlement of the  Nagorno-Karabakh conflict on the basis of principles, proposed by the  co-chairs, "he said.

Russian Foreign Minister Sergei Lavrov, in turn, said that Moscow  highly appreciates the achievement of agreements on the  Nagorno-Karabakh settlement. "We are grateful to you for stressing  the role of Russia and President Putin personally in the efforts that  made it possible to stop the hostilities and agree on a stable  framework for further actions of all parties."

As the diplomat noted, Russia most actively supports the activities  of the trilateral working group at the level of deputy prime  ministers of Russia, Armenia and Azerbaijan, who are involved,  perhaps in the most important, at this stage, issues of unblocking  economic and transport communications, which will make it possible in  practice to end the blockade of Armenia and to ensure mutually  beneficial interaction of all countries of the region for the benefit  of all.