Aivazian: Karabakh conflict is far from being resolved 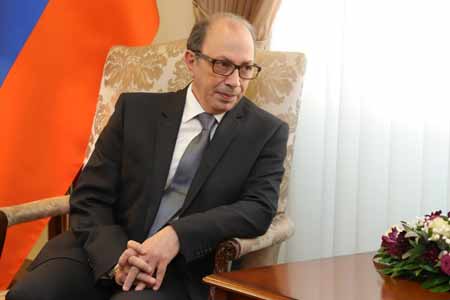 ArmInfo.Acting Foreign Minister Ara Aivazian, during a joint press conference with Russian Foreign Minister Sergei Lavrov, confirmed the clear position of the Armenian  side that the Nagorno-Karabakh conflict is far from being resolved.

"Only through peaceful negotiations can a comprehensive political  settlement be achieved, which will take into account the rights of  all and bring peace and stability to the South Caucasus. And the  basis for such a settlement should be, first of all, the  determination of the status of Artsakh within the borders in which  the people of Artsakh have determined themselves", he said.

Aivazian recalled that the principles of the settlement were  developed by the co-chairs of the OSCE Minsk Group. According to him,  Yerevan is interested in further strengthening and revitalizing the  activities of the international community, which has a mediating  mandate.

"The Armenian side shares the common position of the Minsk Group  co-chairs, which was presented in the April 13 statement that special  attention should be paid to achieving a final, comprehensive, lasting  settlement based on well-known principles and elements," the minister  said.

At the same time, according to acting Foreign Minister of the  Republic of Armenia, at the meeting the humanitarian issue in Artsakh  was also touched upon. "In the context of the steps taken to restore  living conditions in Artsakh, I want to once again thank the Russian  side for their efforts. Today, the priority for Artsakh is the  solution of issues related to providing opportunities for citizens to  return to their homes, restoring infrastructure, housing stock,  establishing normal life and health care."  the minister said.