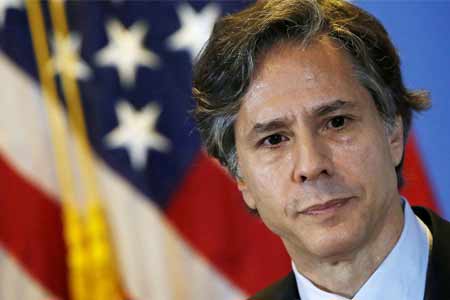 ArmInfo. The USA welcomes the release of three detained Armenians by Azerbaijan. US Secretary of State Antony Blinken tweeted about this.

''The U.S. welcomes Azerbaijan's release of three Armenian detainees.  We call on both parties to fully and expeditiously complete the  exchange process for all prisoners, detainees, and remains, and to  respect their obligations to ensure the humane treatment of  detainees'', Blinken noted.

Thanks to the efforts of the Russian leadership and the commander of  the Russian peacekeeping contingent in Nagorno-Karabakh, Rustam  Muradov, on May 4, three Armenians were able to return home from  Azerbaijani captivity.

It is also worth noting that according to the data of the members of  the European Parliament published the day before, 245 Armenian  prisoners of war and civilians are held captive in Azerbaijan.  However, according to some estimates, this figure can reach up to  four hundred. The Azerbaijani side confirmed the presence of only  captured Armenian volunteers from the Shirak region of the Republic  of Armenia, while qualifying the detainees as "terrorists who must be  brought to justice."

The Azerbaijani side, under various pretexts, is delaying the process  of returning Armenian prisoners of war, thereby grossly flouting the  commitments undertaken within the framework of the trilateral  statement of November 9, 2020.