Acting Defense Minister of Armenia: Territorial changes in borders,  as a result of shifts, are very insignificant 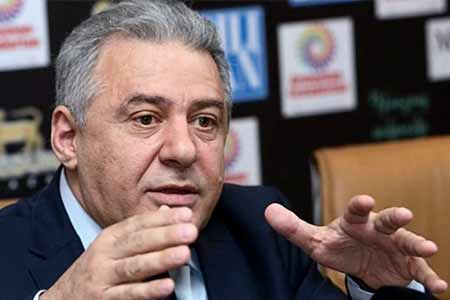 ArmInfo. "The incident in the village of Aravus in the Syunik region of Armenia occurred due to the fact that the Armenian shepherd approached the positions (of Azerbaijani  Armed Forces) and a scuffle took place, which was then smoothed out,"  acting Armenian Defense Minister Vagharshak Harutyunyan said on 5 in  the parliament, during the government hour.

To recall, earlier head of the Aravus community Argam Hovsepyan said  that the Azerbaijani servicemen seized the Armenian shepherd, began  to pull him and hit him in the eye. "The shepherd was 15 kilometers  from their post, this is our land. Our guys ran there with weapons.  They pushed the shepherd and ran away.  Our shepherd stood at the  extreme point of our site, he looked at the GPS. ". It so happened  that we can't even keep cattle," he said.

Acting head of Defense Army touching upon publications that the  Armenian authorities allegedly ceded another piece of territory to  Azerbaijan, assured that the territory within the borders of the  Armenian SSR and sovereign, independent Armenia is fully preserved.  "There are places where we have moved forward 50 meters, and there  are places where it is the other way around. This is due to the fact  that it is impossible to equip the position so that it provides  security and control. Based on this, the positions move back or  forward. In general, I must say that the territorial changes in the  borders as a result of these shifts are very insignificant, and all  these issues must be resolved during the demarcation, "the minister  said.

When asked what is being done to exclude such incidents, Harutyunyan  said that for this, first of all, the relevant authorities must  notify citizens that "it is not worth approaching these posts."  "Similar incidents happen to them," he said. According to the acting  the head of the defense department, the important thing is that these  cases do not lead to death or injury.