Harutyunyan on reforms in army: Command staff will undergo practical  training in military units of other countries 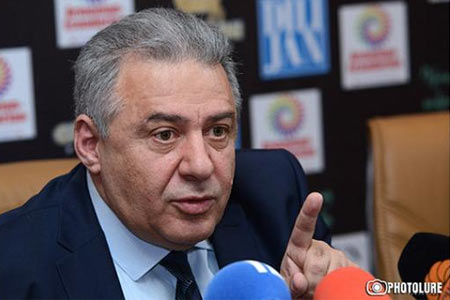 ArmInfo.The modernization of the army will affect all sectors, Acting Minister of Defense of Armenia Vagharshak Harutyunyan said in parliament on May 5.

Modernization and reforms in the Armenian army, in his words, will  affect the legislation of the sector, university education, and there  will be structural changes. "We are faced with the task of bringing  the army into line with the requirements of the times, the  military-political situation," he said.  Reforms in the field of  education, as noted by the acting Minister, will be held in several  directions. First, according to Harutyunyan, it is planned to renew  the personnel at the Vazgen Sargsyan Military Institute.

"Studies have shown that the teaching staff of the university do not  have combat experience, they will be sent to the troops, and those  who have experience, acquired it during the last war, will be  transferred to universities," he explained.

The second direction of the planned reforms will concern programs.  "Since we are planning to acquire new types of weapons, we must  introduce them into the systems of universities so that the cadets  become familiar with them," he said.  In addition, there is an  agreement with the Russian Federation on the passage of Armenian  cadets for training in Russian universities. There is also an  agreement on the training of command personnel in military units of  other countries in order to have the skills of modern military art  and tactics.