Analyst: In reality, Armenia could not avoid Serzh Sargsyan`s  promises 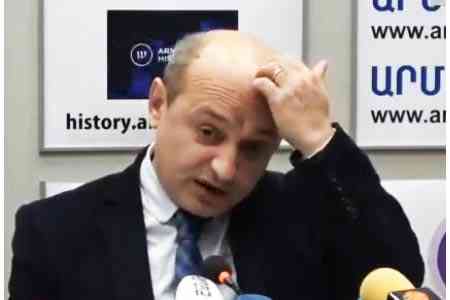 ArmInfo. In fact, what happened in Artsakh last autumn was largely due to the fact that Armenia could not avoid the promises of President Serzh Sargsyan. A similar opinion  was expressed to ArmInfo by the chairman of the Public Council of  Armenia, director of the Armenian Institute of International  Relations and Security Stepan Safaryan.

"Based on the words of Ilham Aliyev, it becomes clear that Sargsyan  promised Baku nothing less than a schedule for the surrender of  Artsakh's territories, naturally, without any clarification of the  future status of Artsakh. But when Pashinyan came to power, he  apparently at least tried to change the course and logic of the  negotiation process, returning Artsakh there, and restoring a  comprehensive settlement option, which included the issue of status,  " he stressed.

According to the analyst, what came out of all these proposals and  Pashinyan's intentions is a topic for a completely different  discussion. Which in no way negates the accuracy of his statements  about trying to negotiate from his own point. And according to  Safaryan, it is also correct to note that even after the  revolutionary change of power in Armenia, the new government  immediately faced a document prepared under Serzh Sargsyan and with  the consent of Serzh Sargsyan.

In this light, Safaryan considers the statements made a couple of  days ago by Pashinyan, according to which the situation was slipping  into war as a result of serious processes starting from the fall of  2015, as corresponding to the realities. To recall, the Prime  Minister, in particular, noted the fact of changes in the content of  the negotiation process in the fall of 2015 and in the winter of  2016.  "Based on the information I have, I can say that, claiming  that there were processes preceding the April 2016 war, Prime  Minister Pashinyan is absolutely right. Moreover, one of these  processes-catalysts in April 2016 was the public accusation of  Armenia made in the fall of 2015 and Serzh Sargsyan by Ilham Aliyev  in non-fulfillment of the agreements reached. And the step confirming  Pashinyan's correctness about what and when Serzh Sargsyan agreed  should be the publication of the relevant documents by him, "  Safaryan summed up.