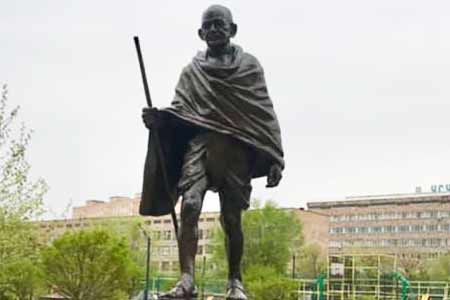 ArmInfo.Yerevan police officers found out the identity of the citizen who committed the act of vandalism against the statue of Mahatma Gandhi.  According to the  Armenian police, this turned out to be a 61-year-old resident of  Yerevan. He was arrested on May 3 and confessed.

As ArmInfo previously reported, on April 29 it became known that the  statue of Mahatma Gandhi was again desecrated in Yerevan. In the  World Wide Web, photographs were disseminated in which the statue was   engulfed in fire. Days before, unknown persons threw chicken eggs at   the monument. After a while, unknown persons recaptured a part of the   cladding from the pedestal.  After this incident, the Armenian  Foreign Ministry issued a statement condemning the fact of vandalism.

To recall, the decision to erect the statue of Gandhi in Yerevan was   made at a meeting of the Council of Elders on April 28, 2020. The   installation of the statue was timed to coincide with the 150th   anniversary of the birth of Gandhi. Then it was reported that the   initiative to erect the statue came from the Armenian Foreign   Ministry. The Indian side has undertaken all the necessary expenses.   43 members of the Council of Elders voted for the installation of the   statue, two abstained. The statue was erected this spring in one of   the capital's squares.