MP: The threat of genocide against Armenians makes it impossible for  Baku to gain power over Artsakh 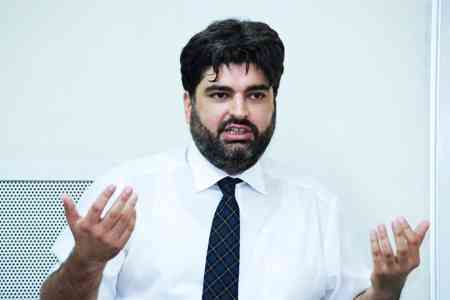 ArmInfo. The opening of the Baku "War Trophy Park" demonstrates the loss of the last remnants of adequacy by the Azerbaijani political elite. We see in all their  glory the dizziness caused by the results of last year's war. And, in  my opinion, this dizziness will not lead the Azerbaijani leadership  to anything good. Mikael Zolyan, a member of the My Step  parliamentary faction, expressed his opinion to ArmInfo.

On April 12, Azerbaijani President Ilham Aliyev opened the "War  Trophy Park" in Baku, where, along with the damaged Armenian  equipment, the Armenian military are mockingly depicted, as well as  the helmets of the fallen Armenian soldiers. Some of them are "  chained to the guns by their commanders to prevent them from fleeing  from the front."

"In my opinion, the "War Trophy Park" and all the accompanying shows,  including those with the participation of Azerbaijani President Ilham  Aliyev, to put it mildly, will not contribute to the implementation  of Baku's plans. First of all, due to the clear demonstration by the  country's leadership Arminianophobia, racism, and xenophobia. This  all means one thing - an Armenian by nationality cannot live in  Azerbaijan, under the rule of the Azerbaijani leadership, " he said.

That is why official Baku, according to Zolyan's estimates,  stubbornly continues to insist on the completion of the resolution of  the Karabakh conflict. Thus, the Azerbaijani leadership, in his  opinion, is trying to consolidate its own point of view, according to  which Artsakh is the territory of Azerbaijan. And, accordingly,  everything that happens in this territory is his internal business.   Nevertheless, according to the parliamentarian, the latest call of  the OSCE Minsk Group Co-chairs to resume negotiations is already  evidence of the futility of Baku's hopes that the Karabakh conflict  has already been resolved.  "The OSCE Minsk Group Co-Chairs have thus  made it clear to Aliyev that his hopes are only hopes and have  nothing to do with the realities based on international approaches to  resolving such conflicts. The existence of the problem, the  unresolved nature of the conflict, is obvious to everyone today,  except, perhaps, Azerbaijan.  From the point of view of human rights  protection, all the recent events have once again proved that it is  impossible for Armenians to live in Azerbaijan. And the threat of  genocide against the Armenians makes the prospect of Baku gaining  power over Artsakh impossible, " Zolyan concluded.