Forecast: Attempts of West to drive Russia out of the region will  continue 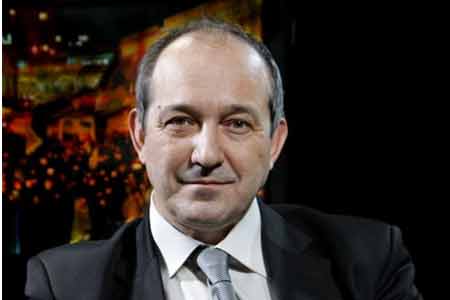 ArmInfo. As a result of last year's war over Karabakh, Russia not only remained, but also  strengthened its own military presence in the South Caucasus. At the  same time, the West's attempts to expel Russia from the region will  continue.

There are already some political forces in Armenia with  serious foreign funding and a possible anti-Russian agenda. Such  opinion was expressed to ArmInfo by the head of the Eurasia  Department of the Institute of CIS Countries, military expert  Vladimir Evseev.

"In fact, Russia remains the main military-political partner of  Armenia. Almost all the weapons of the Armenian Armed Forces are of  Soviet or Russian production. Russia, in turn, is largely dependent  on Armenia as our main ally in the South Caucasus. I think that the  strengthening of our 102nd military base will begin very soon. It  should be particularly noted here that one of the results of last  year's war was the deployment of 25 military camps in Karabakh by our  peacekeepers, " he said.

According to Yevseyev's forecasts, the military class, the same  people from the General Staff of the Armed Forces, can very well  prove themselves in the early elections to the Armenian parliament.   And if successful, they will lobby for military-technical cooperation  with Russia. The latter, according to his estimates, has weakened  somewhat over the past three years. And this is in the context of the  growing need to modernize the national army following the results of  the war lost last year.

Commenting on the post-war situation in Azerbaijan, the expert  described it as euphoria. According to him, from the point of view of  the theory of military science, all the recent shameful  manifestations of this euphoria: frequent and detailed performances,  unpleasant exhibitions, now a park with trophies, indicate that this  state can continue in Azerbaijan for a very long time. "And this  state cuts the connection of such countries with reality, giving them  unattainable dreams. In this light, the exhibition in Baku has become  another manifestation of the unwillingness to stop talking about  victory, " he said.

On April 12, Azerbaijani President Ilham Aliyev opened the "War  Trophy Park" in Baku, where, along with the damaged Armenian  equipment, the Armenian military are mockingly depicted, as well as  the helmets of the fallen Armenian soldiers. Some of them are "  chained to the guns by their commanders to prevent them from fleeing  from the front."

According to the expert, the contradictory statements of the  Azerbaijani leadership, which at the same time mentions the need for  peace, unblocking communications and their supposedly historical  territories, at least suggests that Baku today does not know what  they actually want. At the same time, the very fact of repeated  mention of "historical lands" - the sovereign territory of the  Republic of Armenia, in his opinion, should become an object of close  attention of the international community.

In the light of the above, Yevseyev states that the latest  manifestations of Armenophobia are evidence of the continuation of  Azerbaijan's aggressive policy in the region. At the same time, Baku  is trying to conclude a peace treaty with Yerevan in order to  consolidate the results of the war and the results of possible  geopolitical or internal political transformations recorded in the  November 9 Truce Statement.  "Azerbaijan considers the issue resolved  and seeks to consolidate this decision on paper. Nevertheless, the  existence of many contradictions, for example, the issue of the  status of Nagorno-Karabakh, is more than obvious. And all this is the  reason for long discussions and negotiations. I am personally  convinced of the need to discuss and resolve all these problems as  soon as possible. Otherwise, the unblocking of communications may be  very problematic, and will not be of a full-fledged nature, "the  Russian expert concluded.