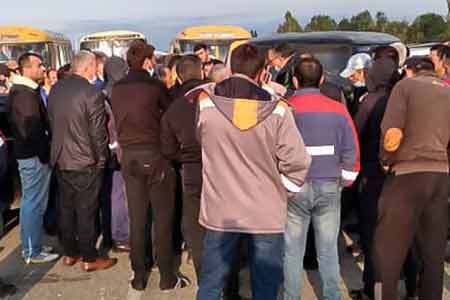 ArmInfo. Residents of the village of Margahovit boycotted public hearings around the possible exploitation of the gold-polymetallic deposit in Lori.  It should be  noted that the opening of another polymetallic deposit is planned in  the Lori region, which is intended to be exploited by the company  Lusajur Ventures Invest, owned by unnamed investors from the Czech  Republic.

Public hearings were supposed to take place today, but  community residents boycotted them, stating that public hearings  would not take place in any settlement of Lori region.  Representing  the interests of Czech investors, the former head of the country's  social security service Vazgen Khachikyan, who was convicted of  embezzlement of funds on an especially large scale during the  previous government, assured the community residents that this is a  closed method of ore mining that does not have a tailing dump. There  will be no enrichment plant here either.

He noted that at this stage it is only supposed to start exploration  work, and only after receiving the results, it will be possible to  start work.

However, the residents were categorical in their decision, in view  of, as they believe, the obvious harm that could be caused by the  operation of the mine to the health of people and the ecology of the  Lori region. In Margahovit, they said that the priority of the region  today is the development of tourism, so there can be no talk of the  exploitation of new metallurgical deposits.