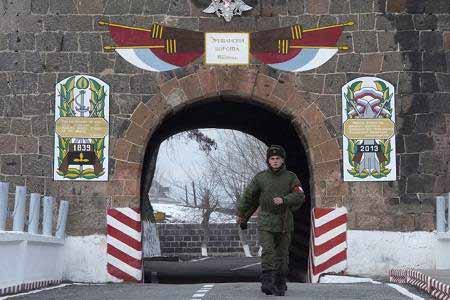 ArmInfo. The military alliance with Russia is the basis of Armenia's external security, Prime Minister Nikol Pashinyan said during a speech in the parliament.April  14, "We must emphasize that the basis of Armenia's external security  is a military alliance with Russia, which is fixed by several dozen  treaties and mutual allied obligations.

In this context, the Armenian-Russian joint group of troops and the unified air defense  system in the Caucasus region are of practical importance for  Armenia," he said.

According to the logic of the formed systems, as Pashinyan explained,  an attack on Armenia means an attack on Russia and the two countries  must jointly resist external threats.

In this context, as the head of the RA Cabinet of Ministers noted, a  large-scale reform of the RA Armed Forces has been launched, which  involves structural and substantive changes. "In the strategic  perspective, we are thinking about the transition to a professional  army and a significant revision of the conscription and conscription  service," he said.

In addition, Armenia and Russia are discussing the possibility of  expanding the 102nd Russian military base and establishing its  foothold in the Syunik region. "These discussions are very effective.   Russian border guards are involved in the protection of the state  border in Syunik, " Pashinyan said. According to him, discussions on  these issues with the Russian Federation are quite effective.